As reported earlier today here on A to Z, Lady Gaga's fabulous show will still go on tonight as scheduled, despite the snow.
But protesters and supporters of the singer have canned their respective grandstanding because of the weather.
Which means drivers who happen to pass the Fox tonight around 7 p.m. won't see signs like this:

Megan Phelps, apparent heir to the hate-mongering throne of her grandfather, Pastor Fred Phelps, shows off these signs she planned on hoisting tonight in front of the Fox Theatre.
​ So why was everything called off?
The Fred Phelps-helmed Westboro Baptist Church explained via an e-mail to the RFT today why they have canceled their protest. Sayeth the WBC:

YES - it is canceled because of the lack of capacity to travel. YAY! Our God doeth all things well. He took that Parody and the words from his people and he dropped them ALL OVER THIS WORLD and then when it came time to make that trip, he shut up this country so they could hold the picket alone and do the work for us. :) YAY!

Here is what he did: Isa 26:20 Come, my people, enter thou into thy chambers, and shut thy doors about thee: hide thyself as it were for a little moment, until the indignation be overpast.

God is knocking the crap out of this country and all the while he is continuing to give us great and effectual doors of utterance because the time is so very, very short - the destruction of this nation is IMMINENT!! YAY!!

Ed Reggi, an activist and lead organizer for Show Me No H8, a pro-gay marriage group based in St. Louis, took to Twitter and noted that in response, he has called off his group's planned rally for Gaga/protest against the WBC as well.
A "kiss-in" has also been nixed, sadly. Stephen Houldsworth of the group, "Phelps protests Gaga; LGBT folks protest Phelps" on Facebook, wrote to members this afternoon:

Hello Kissers!
Well, over 300 of you said you would be out kissing with us tonight. And I want to thank each and everyone who was willing to show up and show love. However, Phelps is not coming. (Thanks to Ed Reggi for the info on Phelps being snowed-in in KC.) The Pro-Lady Gaga folks might still rally, but the point of the Kiss-in was to get those pics of loving LGBT couples in front of the Phelps family (and to drive the Phelps family crazy). Since they aren't coming, I am canceling the Kiss-in. Stay home, stay warm, and keep kissing the people you love.

So everyone stay home tonight, that is unless you have tickets to the sold-out show. 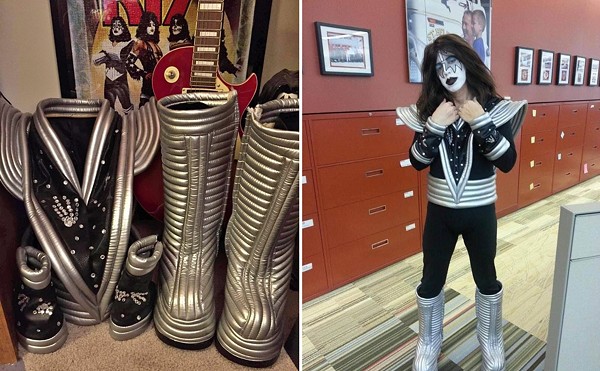