LA's genre-defying Ozomatli travels the world as musical diplomats for the U.S. Department of State 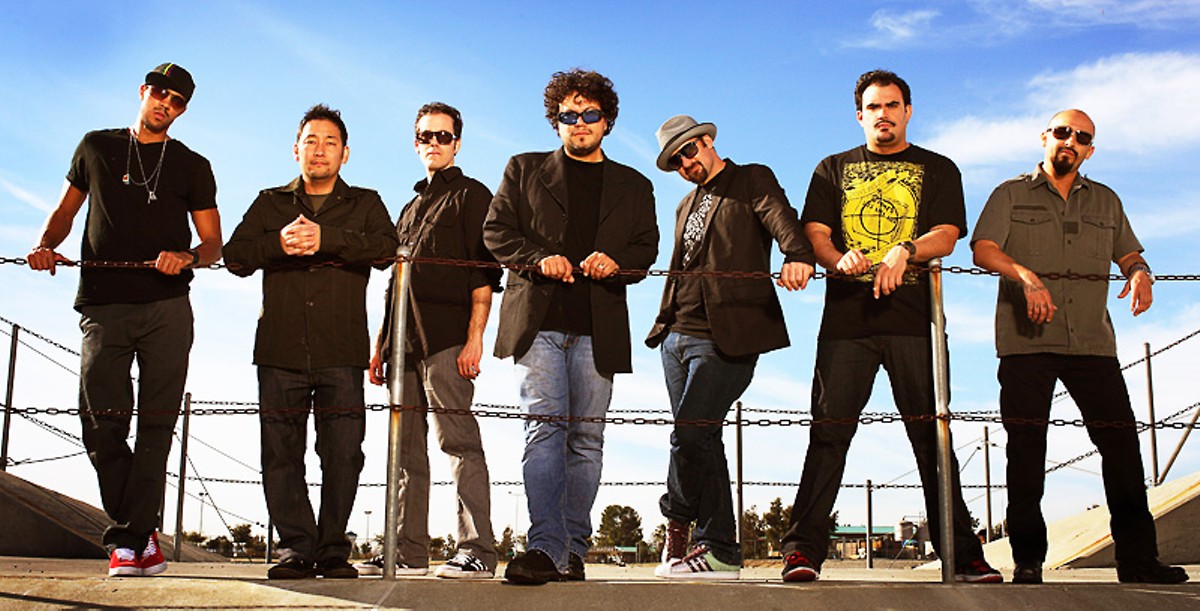 LA's genre-defying Ozomatli travels the world as musical diplomats for the U.S. Department of State

(Editor's note: The full version of this story appeared in the RFT's sister paper, LA Weekly, on June 25, 2009. You can find the full story here: http://www.laweekly.com/2009-06-25/music/music-without-borders. The article will be included in Da Capo Press' Best Music Writing 2010 anthology, which is due later this year.)

Four days into a five-day tour of Rangoon, Burma, we thought we'd had our fill of weirdness. But after Ozomatli is led through Kawechan School for the Blind's darkened hallways and up a flight of stairs, the sound of a flailing guitar solo and the thump of a bass drum punch through the corridor. Around a corner, standing on a stage, four conservatively dressed men wearing sunglasses and matching pink-and-blue polo-type shirts are banging out a rock song. They look like a '60s surf band, the Ventures or something — square and stiff.

Ozomatli, a band born in Los Angeles in 1995, is scheduled to perform a few songs for students, orphans and disabled kids as part of an outreach program arranged by the U.S. Department of State. They didn't count on any competition, and they watch from the side as a band called Blind Reality, facing 100 people of varying degrees of disability, creates a chaotic, freakazoid sound that only four sightless rock dudes living in the pocket of one of the world's most beaten-down countries could possibly make.

Ulises Bella's jaw drops. Wil-Dog Abers gasps and Raúl Pacheco, a thoughtful former Tom Hayden political intern with "Chicano" tattooed on the back of his hand, witnesses, eyes agape, as the guitarist does a double-fingered fret run that would make Eddie Van Halen shift uncomfortably in his seat. The members of Ozomatli have a catalog of mind-blowing images stored from the two years they've been working as musical diplomats for the U.S. Department of State, but this one surely ranks: an expert Blind Reality guitarist whose main influences, he will tell the band, are fretboard gymnasts Yngwie Malmsteen and Steve Vai.

As if Blind Reality couldn't take it any further, after a mean cover of a Bon Jovi song, a lady guest vocalist, also wearing sunglasses, is led slowly to the microphone stand. She touches it with her hand and, the room silent, moves into Creedence Clearwater Revival's "Have You Ever Seen the Rain?" She sings the words in Burmese: "Someone told me long ago/There's a calm before the storm/I know, it's been coming for some time/When it's over, so they say/It'll rain a sunny day/I know, shining down like water."

"Getting up there and seeing these four blind dudes just killing it? I never witnessed anything like that in my life," says Ozo percussionist and MC Justin "El Niño" Porée a few days later.

Ozo sets up, still buzzing from that lightning-bolt moment. Even in a little corner of the world with way bigger concerns than one-upmanship, pride enters the equation when an opening band smokes it. Soon the seven in Ozomatli — guitar, bass, percussion, drums, keyboard, saxophone, trumpet — are playing hard, their rhythms running through the room. A row of children with Down syndrome bounce and fidget; blind kids in middle rows direct their ears at the music and absorb it. Nurses in the back smile.

It's after the first couple of songs that a man sandwiched in the second or third row starts making a commotion. It's not clear whether he's having problems or is somehow disturbed. He's contorted with what looks to be cerebral palsy and is struggling to stand. Ozomatli watches from the stage, swinging to its poppy hit "After Party." Grasping his neighbors' shoulders, the guy pushes his way toward the aisle, arms taut, legs and torso cockeyed, and moves to the empty space in front of the stage. Bella bursts forth with a tenor-sax solo.

Then, as if plugged into a socket, the man starts whaling his arms with the rhythm, a look of joyful determination on his face, bouncing at his knees, punching as he fights to remain balanced while tabla player Jiro Yamaguchi, Porée and long-time Ozomatli drummer Mario Calire offer a cumbia rhythm. You know the iconic image of the man facing down tanks in Tiananmen Square? Imagine the opposite: An observer standing before an invisible force, willfully getting plowed over.

After the gig, the handshakes and the photos, Ozomatli loads back in the van and waves goodbye, a little bit different in the head from before.

When you drive along the boulevards of Rangoon in a white late-model Chevy van, you might as well be rolling in a polka dot Rolls Royce. Monks in saffron robes rubberneck and nudge their companions. At stoplights, as we idle next to old pickup trucks retrofitted to be people-movers, riders in the back and on the bumpers crane their necks to look with kind but curious eyes. In a country in which even a junky compact car costs $25,000 and anything new will run you at least $100,000 after licensing fees and kickbacks, a fresh U.S. government–issue Chevy is something to behold.

The van moves in dense traffic through roundabouts and curving lefts and rights, past Inya Lake, where, three days earlier, an American named John Yettaw had been arrested on its southern shore after swimming to Suu Kyi's compound. A few kilometers later, the Schwedagon Pagoda, constructed a few millennia ago to house eight strands of the Buddha's hair, appears like a hallucination. Shimmering in the morning sun with a new coat of gold leaf, the bell-shaped pagoda looks like it was on loan from another — better — planet.

The first stop of an early-May, three-country, U.S.-sponsored tour that ultimately takes Ozomatli to Vietnam and Thailand, Burma will jar even the most jaded travelers. One of our guides warns us that the country is at least twenty years behind the rest of civilization; soon thereafter we drive past a billboard excitedly advertising the arrival of a new Yellow Pages. The name of the country's most beloved leader, Aung San Suu Kyi, is forbidden from being spoken aloud; rather, she is known simply as "the Lady." The exchange rate of American currency is based as much on the cleanliness of the bill as on what numbers are on it. Hand the hotel receptionist a crinkled or torn $100, and you may as well have just handed her a leaf.

In addition to the moment-to-moment oddities, it has been a strange few days for the band — and the country. On the same day that Yettaw is pulled from the lake and Ozomatli arrives in Burma, two American journalists traveling in Mandalay, to the north, are detained by Burmese immigration authorities. The week of Ozomatli's tour of Burma is also the first anniversary of Cyclone Nargis. The storm, thought to be the most deadly natural disaster in the country's recorded history, killed an estimated 100,000 people.

And if that weren't enough weight, the house-arrest sentence of Suu Kyi, the leader of the National League for Democracy, who has been confined to her compound on Inya Lake for thirteen of the past nineteen years, is up for renewal in a few weeks. The Lady won the Nobel Peace Prize in 1991. She's a living symbol of the prodemocracy movement in Burma but is imprisoned under the orders of the military junta that controls the country. She is allowed no visitors, save for her doctor, and her home is guarded 24 hours a day. This is one reason that many nations refuse to recognize the legitimacy of the junta, or the new name it has chosen for the country — Myanmar.

Richard Mei, chief public-affairs officer in Burma for the U.S. Department of State, doesn't know whether any of these factors — the swimmer, the journalists' detention, the anniversary — are connected, or whether Ozomatli's visit has anything to do with any of it. But news and rumors of the curious happenings have wormed their way into the heads of the American visitors, their state department guides and the two Burmese translators assigned to serve as Ozomatli's attachés.

Mei, a tall Asian American born in Queens, has a simple catchall explanation for anything that occurs in his oft-baffling station: "This is Burma. Strange things can happen." 