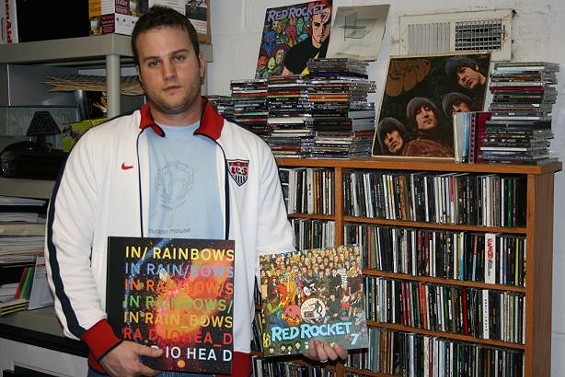 The "pretentious record store guy" has long been the bane of the record shop. Despite their wealth of archaic knowledge, music lovers were never sure whether these pompous clerks were an asset or a plague to their shopping experience. Local comic artist and graphic designer Carlos Ruiz draws from his real-life experience as a record store clerk and exploits the trivialness of music knowledge with his comic, Pretentious Record Store Guy. We met up at his University City home that he shares with his wife Amy and 15-week-old son, Gabriel, and hung out in his basement art studio where he stores boxes and boxes of records, CDs and comics. There we discussed the nature of the "pretentious record store guy," Matt Groening and Red Rocket 7.

Last Collector Standing: What's your favorite record of all time? Carlos Ruiz: I don't know if I could say just one record. Probably, if I had to pick just one, I would say Radiohead's The Bends because I've listened to the album more than any other album I've ever owned. Also, it would be the Lemonheads' It's A Shame About Ray and Come on Feel The Lemonheads. The reason with those two would be because I listened to those two albums on tape in my parent's car and wore them out.

When did you first start listening to music? I first started listening to music when I was a little kid. My sister bought Michael Jackson's Thriller. I would sit there and look at the album. It had Michael lying down with a tiger next to him. That was pretty fucking awesome! The first album that my parents actually bought for me was Europe's The Final Countdown. I remember (hums opening keyboard line to The Final Countdown) that was pretty awesome. I just loved that song so I made my dad buy it for me. The first CD I ever purchased myself was Milli Vanilli. I'm ashamed to admit it, but at the time I loved it. I wanted to buy the Beastie Boys' "Fight For Your Right (To Party!)" [Off the album Licensed to Ill] but my parents wouldn't let me because they saw my sister and me watching the video and said no. It was one of the first albums to have the parental warning so that got the ixnay. I was disappointed about that.

When did you start collecting in earnest? I started getting heavily into collecting when I was in high school, and I joined the Columbia House music club and started buying CDs from there. I was also working, so I had my own money. I was refereeing soccer games, calling baseball games, life-guarding. I had some cash, so I could go and pick up a CD or two at the store. There was Disc Jockey at the mall. It was the best record store that we had. It was a small record store where I lived in Vicksburg, Mississippi. It closed down.

Once I went to college and started working at Slackers, it snowballed from high school.