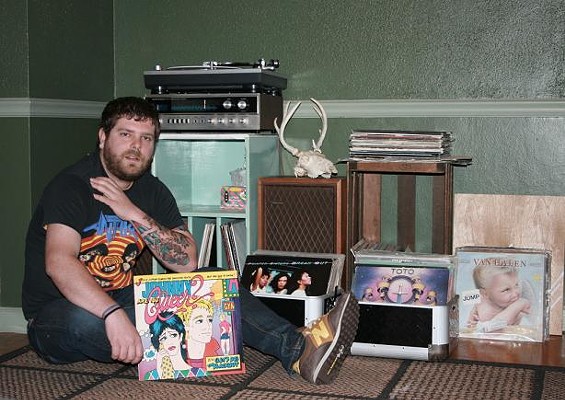 DJing under the pseudonym COR(E)YOGRAPHY, Corey McCarthy has become a vital part of the city's vibrant club scene - as a DJ and as someone helping to bring national acts to St. Louis. A former retail manager at Urban Outfitters, McCarthy now focuses his full attention on his Propaganda sets at Sol Lounge and at other cities across the Midwest. With a building excitement for the upcoming CLASSIXX set on May 28, we caught up with McCarthy at his house in South city and discussed DJ culture, Fisher-Price record players and his long-forgotten first Hall & Oates LP.

Last Collector Standing: What was the first song that you played at your first DJ set? Corey McCarthy: The first time I actually played live was at the Royale on Kingshighway. The first record that I played was Morris Day and the Time's "Jungle Love," reason being that a group of people that the owner had known... had just gotten back from a trip to Africa. He wanted me to play to their likings. Keep it kinda funky. Keep it kinda fresh. He knew that I started out with an '80s set. So yeah, Morris Day and the Time, "Jungle Love," was the first song that I put down.

Not trying to please somebody like a club owner or a crowd, what was the first song that you wanted to sneak into a set just for yourself? I would say that first song that I ever wanted to play in a set was "In a Big Country" by Big Country. It's probably my top song from my '80s collection. The one I have is not an original LP, but actually from Japan. It's the extended version, which was supposed to be on the original LP. It's a really rare one. That was the one that I was waiting and waiting to throw down, because I love that song and a lot of my friends love it too, so when they hear it, they know it's me. That was the best part because when I played that I was so happy, smiling all over the place. Everyone was singing with it. That was the one I was definitely building up to.

How do you collect music now? I use a lot of blogs nowadays. I go to Hype Machine a lot. Beatport. That's pretty much how I download music.

Working in retail, which is what I have been doing for the past "forever" years, the stores I worked at had people come in with promotional CDs from Sony and other companies just to get new bands out there. That's also where I got into bands like Phoenix and the XX and Mew. When they were given out as promotional CDs, that was how I was picking up on that type of stuff. Now I'm on my computer nonstop - blogging, hitting blogs, downloading songs, tracks, MP3s. Things like that.

Most of my records are anything from hip-hop, some jazz, some funk, to a lot of '80s pop, [and] metal bands from the '80s. That was basically what I started out doing when I started collecting records. I was trying to be a '80s DJ.

What was the first record you ever bought? Boy... (Long pause) I'm trying to think. Can we come back to that one?

Sure. Do current DJs still spin vinyl or do they use more laptops and iPods? It's more laptops. I don't see a lot of iPods, really. I know there are people out there who do use iPods in their sets to go back and forth between records. I also used iPods, but it was more to bring in case someone came up with a request that I didn't have on vinyl. Most DJs nowadays that I deal with all use their laptops.

As far as vinyl is concerned, some of them use Serato. The Serato program you can use internally through your computer or you can run it through vinyl as well. You can set up two plain records that put the track through the lining on the vinyl. You can still mix and still scratch, or you can run it internally through your computer where you don't actually have to use turntables.

I use Virtual DJ. It's kind of an older program. A lot of people don't like to use it, but I use the music videos with it. You actually can download videos and project them on a screen while you're playing a song.