Last Collector Standing: DJ Mahf on the Relationship Between Hip-Hop & Art, His Formative Years and His Brother Jim Mahfood's Influence

Having a brother, Jim Mahfood, who is a comic artist and graphic designer, how important do you think artwork is to music? Nowadays it's sad, because I don't think people really give a shit anymore. If you think about it, the way most people see album artwork now is a little thumbnail JPEG on their iPod. That's sad. One of the things I loved about vinyl was picking up an album and seeing the artwork displayed like this [picks up an album]. This was the way music was meant to be looked at. Now that I'm making my own music, I think it's important that it has really striking visuals. I try to get comic book artists involved. I'm a huge fan of graffiti and urban art.

Would hip-hop have been as much of a culture statement as it is were it not for the art as well as the music? The beauty about hip-hop culture is [that] there are all those facets. The four elements: breaking, graffiti, DJing and emceeing. There's even more than that. The fact the graff (a.k.a. graffiti) world grew up with the music... you can't deny its impact on it. There are people tagging all over the planet now. (Laughs)

Do you still spin vinyl live? Yeah, I still spin records. I'm starting to miss it so much. One of my goals for the fall is to start a monthly event where we just spin vinyl. Two turntables, a mixer and vinyl. No more computers. No more fancy shortcuts. Just the raw skill; the raw elements. It's just a different vibe when you're spinning on wax. There is so much more to worry about, the quality of the record, if its warped a little bit, you don't want to bump the turntable or it might skip. Tiny little things like that don't apply anymore for DJing.

The digital DJ age has definitely spawned a lot of DJs who have never even gone out and bought a record. If you put two turntables and a mixer in front of them they couldn't perform. That's funny if you think about it. (Laughs)

The digital age is very convenient, but it takes away part of the learning process of how to mix two records. Nowadays you can BPM something, and it's just reading a computer screen. Before you had to find a record, and you really had to know music and your collection. If you had a record playing, you really had to think about what could mix into it. You didn't have any help from a computer screen telling you, "Hey, this record might work. It's the same BPM." [Laughs]

Now there are so many DJs, I don't even know if they'd be doing it if it were still just spinning vinyl.

Does hip-hop still embrace vinyl? Yeah. They still make vinyl. [Laughs] I heard that vinyl sales are starting to go up again. What's interesting is that I've read a couple articles that even larger stores like Best Buy are starting to carry limited amounts of vinyl now. I actually saw some in Kansas City a few months back. It freaked me out, because I used to work there back in the day. That was my first job. They didn't have anything like that [when I worked there]. I even heard that Wal-Mart is carrying certain big releases on vinyl. They wouldn't be carrying that if people weren't buying it.

In hip-hop it will definitely not die, especially when it comes to battle DJs and turntablists. That's the format, and that's the way it will be forever.

What's the craziest experience you've had DJing? When you get to start opening up for your heroes, that's always something that still gets me excited and gives me butterflies. I went out to L.A. two years ago and got to open up for Cut Chemist from Jurassic 5, who was one of the DJs that I was obsessed with growing up. He started his set, and I was finishing mine. He was like, "Drop another record! Hang out and start my set with me!" That was awesome! It kind of came full circle there.

The other guy that is probably the DJ I look up to the most is DJ Z-Trip. He's the guy who created the mashup movement. He's an incredible hip-hop DJ. He knows how to rock parties. To me, he's the ultimate party DJ. He can get up in front of a crowd and read them better than anybody I've ever seen in my life.

My brother Jim is really good friends with him. They got to know each other in Arizona. When I was sixteen, I visited my brother in Arizona when they were living there, and I got to meet Z-Trip before he moved to L.A. I got to spend a day in his studio. I only had turntables for like six months, and he put me on a set of turntables in the studio and got on a set and was like, "Let's go, kid!"

He came out to the Cut Chemist show and was like, "You came a long way, kid!" At the end of the show all the DJs that performed got on stage and Z-Trip got up. It was us three with a live drummer and a live percussionist. We were all scratching together. I was looking around on cloud nine and going, "These are my two favorite DJs in the world and I'm playing with them in L.A. in front of all these people." Being able to do shows like that and collaborate with people makes me feel like maybe I can be in that position where I could influence someone like [they] influenced me. Maybe some younger kid will be like, "I grew up listening to Mahf!" That to me is what I'm in it for.

Then there are all the crazy little stories. I won't name the spot, but this was earlier this year at one of my weeklies. There was this couple that was straight up fucking on the dance floor, up against the wall. The bouncers had to come and break them up. They were like, "Should we go over there?" [Laughs] 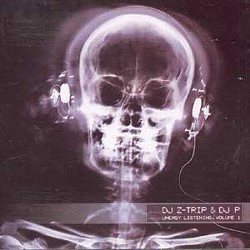 Wow! You're definitely doing something right! How many records do you own? Do you have a prized piece in your collection? I maybe have 2500 to 3000. One of my most prized records is DJ Z-Trip and DJ P Uneasy Listening. There were only 2000 of those vinyls made. That was the album that started the whole mashup DJ revolution. I have it hanging on my wall!

Will there ever be an end to vinyl records getting released? No. That will probably never happen. I hope it never happens. It's scary to me though, when you're starting to watch record stores close down. Just recently, Fat Beats New York and Fat Beats LA closed, and for hip-hop DJs and funk and soul guys those were two of the greatest record stores in the country.

That scares me to see stores like that close, but there will always be guys like me and people who aren't DJs, who are just collectors. It will always be alive. I have a feeling that it will be harder to find. As far as vinyl goes, it's harder to find stores that are still holding the amounts of records like Record Exchange, Euclid [Records] and Vintage [Vinyl]. There might come a day where they are still making vinyl, but we are ordering all of our shit off the internet.

We'll see where it all goes, man. We may have robots DJing for us. I think they already have that in Japan. [Laughs]

I would believe that! I saw some show where there is some bar in Japan that had a robot bartender, and they literally had a robot DJ. It picked up records and put the needle on. That's all it did, but I was still freaked out by it. This is starting to get a little scary. [Laughs] Who knows, we may all be obsolete some day.