The number of chain record stores nationwide has dwindled. However, St. Louis has become an unlikely safe haven for indie record shops as well as for DJs who prefer to spin the black circle instead of scrolling their iPods. In this weekly column, we'll focus on personal portraits of St. Louis' record aficionados and the rooms where they store their treasures. Meet the last collectors standing. (Know a collector who deserves the spotlight? E-mail us. Miss any previous ones? Read 'em all here!) 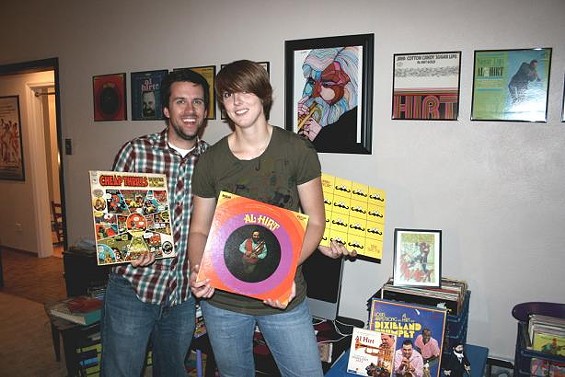 This weeks Last Collector Standing collection was discovered entirely by happenstance. I've recently been working on editing a Walking Dead commercial for Star Clipper with Brian Spath, the Operation Supervisor of the St. Louis International Film Festival. While at his south-city home, I noticed his wife Kara had quite the unlikely collection of Al Hirt records displayed on their living room wall. I returned the next night for an interview and between a playful back and forth with the couple and their dog Moose pining for attention, we talked a great deal about Al Hirt records, RX Bandits and a urine-soaked thrift store experience.

Last Collector Standing: What's with all the Al Hirt records on the wall? Kara Spath - I just think he is funny. He's an obese, hairy....

Kara - Fine. He is a fat, hairy trumpet player and he had a lot of records. The album covers are funny.

I went to Mizzou. I was living in my friend's house and we wanted to decorate one of the walls with album covers. We were going around to different thrift stores and I saw this one record with this fat guy with a beard in the middle of all these colorful circles.

I walked away from it, but it kept calling back to me. I got it because it was [only] twenty-five cents. One weekend when I was home from Mizzou, I went to a different thrift store and there was another record that I found and it just said, "Hirt." I thought, "That's the same guy I bought in Mizzou." It just spiraled out of control from there.

How many Al Hirt records do you have in total? Kara - I just counted. I have 87.

Kara - I have duplicates. I have 62 different ones.

Brian - How do you have 25 duplicates?

Kara - I don't know! It gets to the point where I can't find new ones anymore, but I'm like, "This ones nicer than the one I already have. Maybe I'll just get it." It's really difficult to give them back to Goodwill.

How much do you think you've spent on Al Hirt? Kara - Does that include everything? I have artwork, a couple hurricane glasses, an ashtray. If you just consider the record part of it, the most I've spent was on the Green Hornet one The Horn Meets The Hornet. That was twenty bucks at Euclid Records. I looked at it for a year and then I finally got it. Besides the twenty dollars, a lot of them were ten cents. A lot were twenty-five cents. I probably spent no more than sixty bucks.

Would having an Al Hirt collection on your iTunes mean the same thing to you as having a collection of records? Kara - Definitely not. I feel I'm displaying his albums as art. I like trumpets, but I feel like a lot of it is for the album art. In the electronic age there is a disconnect with the music and the art that comes with it.

We have a Christmas Al Hirt CD and we've listened to it, but it doesn't feel the same. I feel like I'm dishonoring him a little.