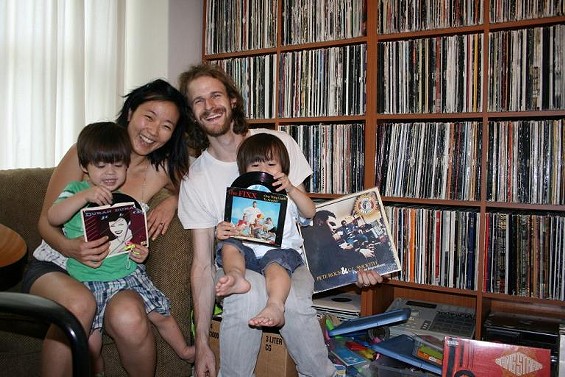 Jon Scorfina
DJs Agile 1 and Crucial with their twin boys

(Note: This is part two of this week's Last Collector Standing. You can read part one right here!)

Last Collector Standing: Are there different expectations for women as DJs? April: Yeah, I think the expectations are super low. Based on women I've seen in other major cities, like LA or Chicago, some women can get gigs based solely on how they look. They don't even mix. They just play music. That's cool if that's how you make a living, but don't call yourself a DJ.

If I'm playing at a gig, for some reason people always assume that if I'm with Rob that I'm like his underling, or in training. Or they think that I just started learning how to do it even though it's obvious that I'm proficient at what I'm doing.

I went to school in Detroit for a year to get my masters, and Rob came with me. We got into the DJ scene pretty quickly. This one dude who had been around Detroit for a long time was teaching this girl to DJ. She had only been DJing for like three months and he was like, "You two should battle." I had just won a battle, and he wanted me to battle her when she doesn't know how to mix. It doesn't make sense. He put us all on one plane. It doesn't matter if you've been spinning for ten years and have won five battles. You're still a girl, so you're equivalent to that girl who maybe has a boob job and is playing records.

I was doing a gig here in St. Louis and I was the opener. Then this out-of-town girl came in who was a big deal. She comes in and literally takes her top off and has these tassels on her boobs. She was barely doing anything. There was a dude standing behind her actually handling the mixing for her. She was just like [mimics bouncing chest] and dancing.

This is not sexy. [Both laugh]

April: That's how I fell out of being interested in getting gigs. It's discouraging that lack of skill can be appreciated so much.

Have things gotten better at all for female DJs, or is it worse now? April: I would definitely say it's better than when I started, I'm a little embarrassed to say, twelve years ago. I feel like when I started spinning there were zero other girls DJing in St. Louis, besides maybe a few electronica DJs. Definitely not hip-hop DJs. I don't know if the real hip-hop DJ has any monetary value anymore.

Why do you think the value of the DJ has changed? Does it have anything to do with the disposable nature of digital music? Rob: There are a lot of little things that I think have changed. I don't have a problem with digital DJing, because I do it. I still bring out a bag of records. Just last night I did an hour of just vinyl. I shut the laptop. It's like this relief. You actually have to move the needle. You can't just hit a button.

When I was coming up as a DJ, you had to have records or you weren't going to get any work. People were excited to come to the club and hear songs they might not have. I could play a rare record and people would be like, "I wish I had that!" You would have spent all this money and time to find this record and when you played it people were genuinely excited about it. DJs spent most of their time buying all of these records. If you missed out on something and started DJing in 1994 and you needed a twelve inch from 1990 you'd just be looking. Ebay was just getting started. We would take trips to Chicago just to look for records. Your clout as a DJ was based on what you owned.

With that being said, now the MP3 has changed two things. It's changed the audience and it's changed the DJ. On the internet, you can download any song that you want. It's very specific to their taste. All day long they can pick any song that they've wanted and they've got this perfect collection. [The audience] hears whoever's spinning up the street and go, "I've got all those songs right here on my iPod." You don't need to go see someone play it off a record. One big thing that's changed is audience participation.

DJs getting MP3s is great. It's so convenient. You're not lugging eight crates out to a gig to have a cool set, but that's one thing I don't like with digital DJing. You miss all of this [points to the wall of records]. You miss the camaraderie. "You have that record! Will you sell it to me? Will you trade it to me?"

Would you say that cheapens the DJ experience or that people don't appreciate it like they use to? Rob: At this point, I think it's almost more of an inconvenience to bring out records because all of the songs are right there on your laptop. I can't even image a new DJ thinking about all this stuff. What was your question again?