Last Night: The Presidents of the United States of America at Taste of St. Louis 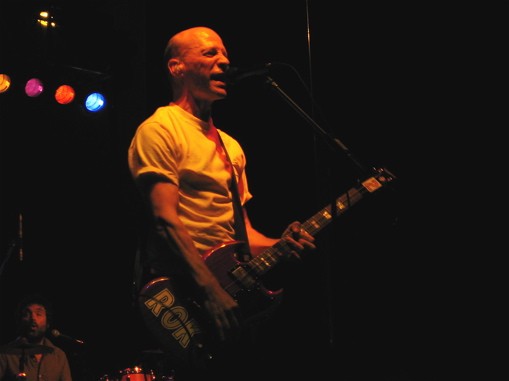 photos by Keegan Hamilton
Chris Ballew of PUSA
No self-respecting St. Louis music fan went to see the Presidents of the United States of America at Taste of St. Louis last night. Between Sea Wolf, Michael Franti, the Big Muddy Records rooftop party, Darker My Love, and the Cardinals game there was a whole bevy of "better" things to do than to go see some one-hit wonder goof rock band from the '90s sing songs about peaches and insects and lumps.

Perhaps, as a native of the Pacific Northwest who grew up listening to PUSA blow the roof off every venue between Portland and Bellingham, this reviewer is more than a little biased. But I'll be goddamned if there is a band on this green Earth that puts on a better rock and roll show than PUSA.

Yes, they are best known for one song that came out in 1995 and yes, their last album (yes, they still make new albums) wasn't very good. But this is a band that takes the high art of rock music, sees the silliness in it, and plays to the bone with windimill strummin', drum kit standin', finger-tappin', guitar-swingin joy.

With everyone who takes music seriously in this town off doing something else, the crowd was a sight to behold. We're talking a man wearing a coonskin cap toting an American flag, a smelly homeless guy, a couple fucking in front of the stage*, honky-tonk dancers and people with bubble blowing machines. It may not have been packed but there were still enough people to sing along to the band's nah nah nahs and woo hoo hoos.

Longtime frontman Chris Ballew has the stage presence of a stand-up comedian and the musical chops to pull off every cheesy rock stunt in the book without missing a note. Who else would turn the song "Old Man on the Back Porch" (from their first album) into a dueling banjos battle with Gary Coleman? Or go into a full-on Animal House-style version of "Shout"?

(Keep in mind Ballew plays with a funky-tuned two-string "bass-itar" of his own creation, and Andrew McKeag, who replaced founding member Dave Dederer a few years back, plays with a three-string "Guit-bass." They only have one guitar's worth of strings between the two of them.)

Even some of their "new" material is strong and, most importantly, thoroughly entertaining. On "Highway Forever," a foot-stompin' hip-slappin' road song from 2004's Love Everybody Ballew does an a-cappella "invisible" harmonica solo that would make that guy from Police Academy proud.

At worst their music is the too-cheery, knee-jerk reaction to Seattle's grunge scene. With last year's over-enthusiastically titled These Are Good Times People, that element of the band's music was more glaring than ever. But, at the end of the day, the Presidents play with zero pretension. They smile, they laugh, they crack jokes, they have just as much fun as their audience.

And they love to rock and roll.

They paused for the encore, then came out with "Cleveland Rocks" (while a certain local music aficionado from Cleveland was in Boston or someplace) and wrapped it up with "We're Not Gonna Make It" which they deftly shifted into "Looks Like We Made It After All."

If that doesn't rock, nothing does.

*To the couple fucking in the front row on the barrier directly in front of the stage: WTF? No, Seriously, WTF? You lady, were in your early 20's, blond, a little on the plump side and wearing one of those coats with the cheap faux-fur lined hood. You, dude, were late 30's had gelled blonde hair and looked a little haggard. Did you know each other before last night or did you both get wasted and meet at Taste of StL? Are you having a passionate affair? Are you married to each other and have ten children with another on the way? Did you end up actually fucking on a bench in the park immediately after the show? Between the tonsil hockey, grinding, dry-humping (both upright missionary and doggy-style) I'd be amazed if you had any mojo left after that. Next time, get a room. Or a car. Or a Porta-Pottie. Just not in the MIDDLE OF A MOTHERFUCKING ROCK CONCERT with three hundred people watching and pointing and laughing. Jesus Christ, have some dignity.