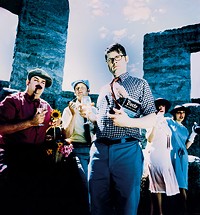 To say that the Decemberists challenge their audience is a vast understatement. Need proof? The Portland quintet opened its show at the Pageant on Saturday night with a twenty-plus-minute performance of The Tain, a 2005 EP release that's a fan-favorite but not exactly the sort of song that'll catch the ear of people who aren't their fans.

But it's not like the Decemberists need to pander to anyone; after all, the rabid, largely under-21 crowd at the Pageant hung on every well-enunciated syllable uttered by frontman Colin Meloy. The band's 2006 album, The Crane Wife, is at once its most challenging release it contains two ten-minute-plus tunes, including one laced with some seriously psychedelic-sounding prog breakdowns and its most accessible (the concise, touching pop songs outnumber the indulgent numbers). And the band is in the unique position of being wildly popular but still remaining largely unknown outside most circles, meaning it has much leeway in terms of stage shenanigans.

First and foremost, in keeping with its lyrics' antique themes, the quintet dressed in 1920s-reminiscent suits and formal wear that a friend commented looked straight out of The Great Gatsby. But the band knows that hardcore Decemberists nerds embrace such eccentricities. For teenage fans, it's clear that the Decemberists are one of those bands that remains a big secret, some hidden treasure they cherish and can geek out over; for older fans (of which I'm included), the obvious pretentiousness of the group is forgiven because of its humor and more important, melancholy. You want to hate Colin Meloy for his use of big words and sometimes-precious antics (or for his polarizing, nasally voice, which conjures one of his musical heroes/influences, Morrissey); but as this live performance showed, the band doesn't always take itself very seriously -- and when it does, Meloy's lyrics are simply heart-wrenching, using (pretentiousness alert!) history as a thin veil to illuminate the pathos of the human condition.

But did the band's performance match its reputation? Well, mostly: After The Tain came disappointingly weak versions of "Crane Wife 3" and "Yankee Bayonet" the latter featuring Shara Worden (more on her later) on vocals, and featuring I believe monitor problems followed by a moving, pedal-steel-featuring "Clementine." But "16 Military Wives," where Meloy, maestro-style, divided the Pageant up into four quadrants and instructed the audience into a giant harmonic round, completely rejuvenated both band and audience. After that, the aforementioned Crane Wife prog breakdown okay, reminiscent of Boston more "The Island: Come and See/The Landlord's Daughter/You'll Not Feel The Drowning" crackled with energy, and a sweet rendition of Wife's "Sons & Daughters" closed out the set. Meloy came out for the encore and performed a gorgeous, moving solo rendition of fan-fave "Red Right Ankle," which was a mere precursor to "The Mariner's Revenge Song."

Show-stopping is a vast understatement. What did this song include? Sea-shanty beats, ridiculously goofy dancing from all concerned including a few people on the upper concourse -- and a giant paper-mache whale, Odyssey-of-the-Mind-style. But don't take my word for it. Check out the video shot at the band's show in Louisville on Friday.

(Decemberists fans are also meticulous about uploading amazing YouTube footage of the band: Check out a Halloween-night cover of R.E.M.'s "Cuyahoga," an all-too-short snippet of a cover of the Waterboys' "Fisherman's Blues" (with Mike Scott) and a Robyn Hitchcock cover. Perhaps uncoincidentally, this trio of groups (along with the Smiths) pretty much sum up the Decemberists' influences.)

My Brightest Diamond the name under which Shara Worden records opened the night with a fantastic, ferocious half-hour set. Wearing an all-white outfit, Worden -- who's known for her tenure in Sufjan Stevens' band and is signed to his label, Asthmatic Kitty -- channeled P.J. Harvey in her Rid of Me/To Bring You My Love days, mainly in the way she slunk around the stage with a feral agility and unleashed take-no-prisoners snarls. During smokier songs, Worden's voice possessed the sleepiness of Mary Timony (late of Helium), although a cover of Led Zeppelin's "No Quarter" was pretty much mind-blowing. Run out and buy her 2006 album, Bring Me the Workhouse. Now.