Lauren Gornik’s Brutal Illustrations Have Made Her Metal's Go-To Artist in St. Louis 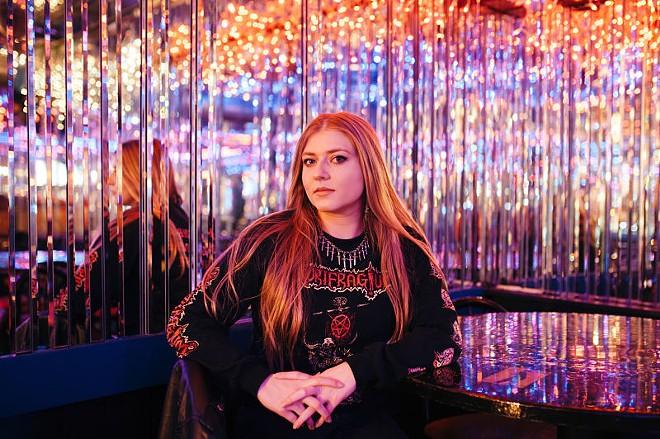 His eyes wild, the Jackass star is depicted with a mane and hulking paws, the big cat component of a three-headed monster. His parents make up the creature's other two heads — Phil Margera horned and scaly, with wife April sporting horns of her own and a furry beard under her chin.

Naturally, the piece is titled "Bam Chimera." Phil is a dragon head, Bam is a lion and April is a goat, and they're all chasing down Bam's disgraced uncle, Don Vito, clad in a polo shirt and shorts, running in fear. Best of all, it is printed on a skateboard deck — the most appropriate medium imaginable.

The piece is the work of local artist Lauren Gornik, and it will be one of 50 decks on display at the Super-Duper Radical Totally Awesome Skate Deck Show opening March 30 at 4 Hands Brewing Company (1220 South 8th Street, 314-436-1559). Gornik will be joined by 49 other local artists including Peat Wollaeger, Shannon Knox, Piper Williamson, Jon Strode, Stan Chisholm and Ashley Hohman for the event, which is spearheaded by Bryan Walsh and Killer Napkins artist Jason Spencer.

The Jackass theme is a new one for Gornik, whose pen-and-ink illustrations have made her a go-to for album and t-shirt art in the metal community in recent years. She's already put eight hours of work into the piece, and estimates it's only halfway done.

It's not exactly not metal — it is a horrifying monster, after all. But it is definitely a departure from the usual darkness and brutality of Gornik's work with bands across the country.

In a piece for the New York-based blackened death metal band Ordeals, for example, a fallen angel depicted as a skeleton with wings descends on a crying nun who is clutching a rosary. She's surrounded by six other skeletons, all clad in habits. It seems clear that things are about to go very south for the sister, and a group of four additional skeletons mark the dark occasion with trumpets.

Or there's the piece for the Columbia, Missouri-based act Acid Leather, in which a group of women clad in leather jackets and fishnets surround a man in an alley. One of the ladies is strangling the unfortunate gentleman with a chain while the others — armed with knives, bats and broken bottles — look on, quite pleased.

What's most striking about Gornik's work is her attention to detail. Each line is painstakingly deliberate, and her labor-intensive pen-and-ink style has brought her work with bands from St. Louis and beyond, including locals Thorhammer, Lightning Wolf, Separer, Hell Night, Tyranny Enthroned, Gestalt and Tropical Storm!, as well as national acts including Savage Master, Nekrofilth, Gatecreeper and Deceased. She even did a cover illustration for RFT's 2015 feature on St. Louis' local metal scene.

Gornik initially got interested in metal in Chicago, where she grew up and performed as a musician herself.

"I've always been really heavily involved in metal. I used to play music years ago," Gornik explains. "I kind of left that by the wayside to focus on doing more artwork and focusing on my career. But I just knew so many people in the metal community up in Chicago, and over time I started meeting more people all throughout the country through fests, or I book shows sometimes. I just get to know so many people, they all see my artwork and word of mouth pretty much spread."

Gornik knew since graduating high school that she wanted to make a career out of her illustrations. During her time at Northern Illinois University she picked up constant freelance work to make connections and hone her craft. She initially was considering a career in scientific illustration, but a relationship brought her to St. Louis, where she quickly landed a job as an illustrator for R&R Enterprises, a racing apparel company based in Valley Park.

"I never had an interest in racing before that," she admits," but now I'm kind of enthralled with all of it. There's a lot of characters."

The relationship that brought her to town ultimately didn't pan out, but with a good job and a steady stream of illustration work from the thriving local metal community, Gornik has come to think of the River City as home.

"I like St. Louis," she says. "I thought about moving back to Chicago a couple times, but I've become really acclimated to things down here, and I like it. So who knows? I think I might stay."

She'll at least be around through March 30. After all, she's got a Chimera to finish.