Update: See photos from the Gerry Lundquist benefit at Lemmons 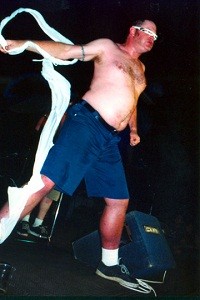 This man needs your help!

RFT Music recently caught wind of some concerning news regarding Gerry Lundquist, beloved trombonist of ska-punk pioneers Mu330 and Skankin' Pickle. Apparently the "Ayatolla of Rock n'Rollah" has run into some health issues which have resulted in mounting medical bills and significant out-of-pocket costs. Anyone who knows Gerry, though, knows that he's as proud as he is warm and caring. Make no mistake: This is not Gerry Lundquist pandering for cash or sympathy. This is an event that's being put on by some friends at the Silver Ballroom, who wanted to help out simply because Gerry is a wonderful human being.

"We just want to help a guy who has never asked for a help. Too many times I've attended benefits and tributes to people who were already gone," says Justin Deming, event organizer and Silver Ballroom bartender. "I think it's even more awesome to be able to pay tribute to someone while they're standing right there and to let them know, 'Your music has been a real part of our lives.'" Not that Lundquist is one to toot his own trombone about his accomplishments. "I think I bartended for Gerry for over a year before it clicked that he was Gerry from Mu330 and Skankin' Pickle," says Deming.

So here's what to expect: Sunday night at Lemmons, local punks the Scam, the Haddonfields and the Unmutuals will all hop on stage and belt out their sneering brands of punk rock in honor of Lundquist -- don't be the least bit surprised if you hear an Mu330 or Skankin' Pickle song along the way. Also on the bill is a special one-off performance by Gerry's Kidz (get it?), a group of Silver Ballroom regulars, and scene vets, comprising members of The Scam, Krafted in Korea, Man-Eating Tiger and Pillow Talk, to name a few. Gerry's Kidz will be playing some of Lundquist's go-to cuts from the many times he's thrown a dollar into the highly-regarded Silver Ballroom jukebox.

So show up at Lemmons this Sunday, January 13, at 7:30pm. There is a five dollar cover, but feel free to contribute more if you are so inclined. There will also be raffle items donated by Pabst and Trader Bob's Tattoo Shop. Cap off your weekend fun power-skanking next to the originator of the power-skank himself, the inimitable chainsaw-wielding Gerry Lundquist. Gerry is strong.