Long a Go-To Musician, Chan Evans Now Finds Himself at the Front 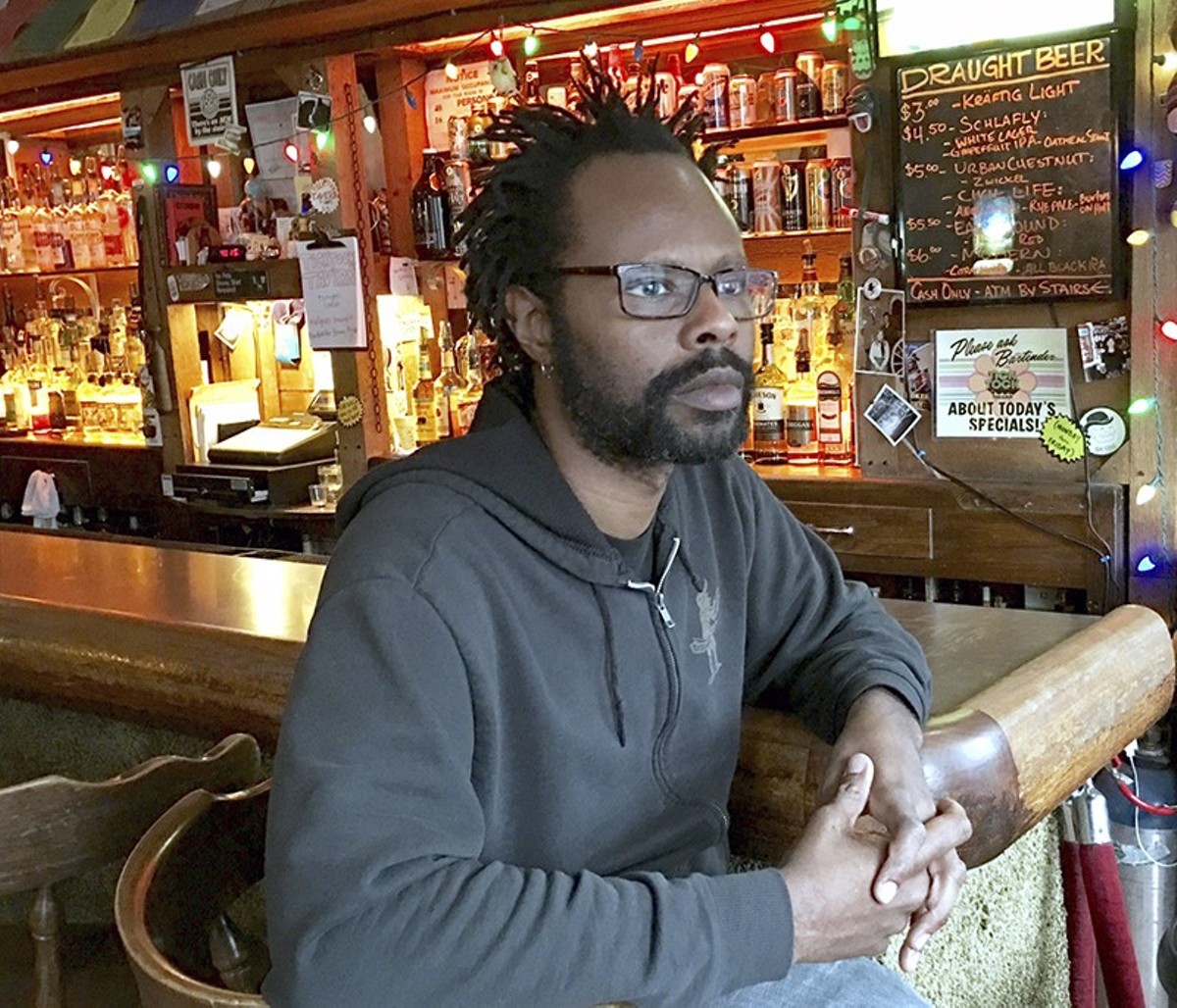 As a performer, Chan Maurice Evans is best known around town as a guitarist, though he's also played live on bass and, most recently, his "first rock instrument," drums. Now 42, Evans has logged time as a member of original acts dating back to the '90s — Fragile Porcelain Mice, LP Outsiders, Geishamen, the Tennis Lesson, Railers of Kiev, Republic of Sound, Dibiase, Ghost in Light. While some had short or unrecorded histories, others were critical darlings or, as importantly, acts beloved by other musicians.

Not one to rest on his laurels, Evans is still at it. Talented and versatile, he was busy in three groups in 2016 alone: one an original act (CaveofswordS), another performing covers (Hella Snaps) and a third blending both originals and covers (Steve Ewing Band).

Outside of playing gigs, he's worked restaurant jobs and as a music instructor. But performing live is his real passion.

"I get an itch if I'm not involved in it," Evans says. "There are times you don't even want to look at an instrument; sometimes, for a while, I won't go see a show. But once you do see a show, it goads you back. You think about what you can do to be performing. You can write and put stuff on a hard drive all you want. But you'll start missing being on the stage.

"That why I've started writing," he adds. "I've never really fronted a band."

His new act, called You People, is tied in several ways to the group he left in late 2016, CaveofswordS. After the band pared back to a drummer-less trio, Evans found himself plunging into "the echo chamber of Facebook," as he puts it. Brandon Mason, formerly a player with the same band, struck up an online conversation relating to, Evans recalls, "Black Lives Matter, Blue Lives Matter, the election. There was so much being said. It really felt like a good time to make some new music."

The two are now trading tapes in a band that has Evans playing around with more electronic elements than in previous efforts. When he played with CaveofswordS' Kevin McDermott and Mark Cange of the recently disbanded Tennis Lesson, Evans worked with, and observed, perfectionists in the art of crafting sounds from all manner of physical and digital sources.

"I'm kinda wanting to know Kevin's perspective, Mark's perspective," he admits. "They're the structure builders. I've always been sort of the interior designer, the guy to fill in the colors." Now Evans is the one doing that building. He sketches out the basics as "electronic, so far. There're programmed beats, guitars, effects, vocals, harmonies."

While neither member of You People is opposed to the idea of adding others, Evans says there's no rush, either — no plan, really, other than crafting exactly what they want on their own timeline. Working together seems to give Evans visceral pleasure. He describes trading tracks via Ableton and waiting to hear what Mason's contribution to one. The tune began, and Mason's part didn't start right away ... "And then... what?!?... it just hits. There was another dynamic I didn't know; there was another gear to the song. I was laughing, laughing my ass off," he enthuses.

He adds, "We've only chatted about other members one time. We'll see how it flows from here. When it's time to put together an album or a full set for a show, then we might pull in someone interested. I do sorta want a full band, with organics mixed with electronics, like Nine Inch Nails or what I was doing in Cave. We just don't know when that time will be."

And to keep his live-play needs satisfied, there's still that Hella Snaps gig. Born as a '90s tribute group, the band has extended its playlist a decade in each direction to score more gigs. Though able to play anything from weddings to corporate gigs to mainstream clubs, the band is on a tight schedule thanks to the time needs of six players. Rehearsals only happen when there's a new track to work into the group's three sets.

"They have a long history with it," he says of the act. "It really is a different world. There's some competitive aspect in the original music scene. But, really, we're all supporting each other and when someone's doing well, you try to keep up. The cover scene's kinda cutthroat. There's so much money there, but only so many gigs. Everyone wants a residency and everyone's got their favorite gig. Tomorrow we'll be filming a new promo video. You gotta have your commercial! And our first one didn't have the formula that everyone's used. So we'll keep up with the Joneses. There's definitely a business side to it that the originals guys don't see."

Despite his busy music schedule, deep history of local performance and high musicianship, Evans at first resists talking to a reporter about his work, wondering why anyone would care and asking if we had the right guy. Told that his history (and future) merits the attention and that his personality is well-regarded, he beams. And then he offers up an amusing summary of why folks might think that, from his star sign to his Myers-Briggs Type Indicator results.

"That's cool to hear," he says. "That's great! I dunno. But I'm a Scorpio. And an ENFJ. And even though everybody gets their moods, I surround myself with great people and act the best I can."