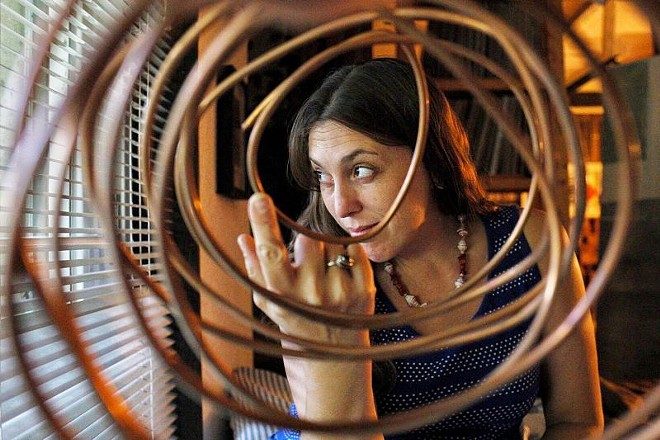 St. Louis' art community has been aware of the work, influence and artwork of Jenna Bauer for more than fifteen years. She founded the South City Open Studio and Gallery (now ArtSCope) in Tower Grove Park, and that non-profit's fundraiser, Wall Ball, is a highlight of art, philanthropy and scene-making every year. But her painting and educational work is Bauer's calling-card, not her first love. She came to visual art almost by happenstance in college (she received her BFA from Webster University) after initially planning to study music.

A native of Ballwin, Bauer began studying the string bass in grade school and was tutored in the Suzuki method; in high school, she was appointed to All-State in both orchestra and choir. Later in life, she played upright bass in the mellow folk-rock group Yellow Afternoon (alongside a pre-Living Things Jason Rothman), and in the early 2000s Bauer performed in Palookaville, one of the late Bob Reuter's many outfits.

With this live recording of jazz standards, however, Bauer makes her debut as a singer. She brings three of the city's best, most intuitive players along to the gig: guitarist Dave Black, pianist Mo Egeston and saxophonist Dave Stone comprise her backing band, the Be Here Nows.

Bauer moved back to St. Louis two years ago after several years in upstate New York and Manhattan. In conversation in her South Hampton studio, she talks about sitting in at late-night jam sessions or impromptu afternoon busking in Washington Square Park, singing "Bye Bye Blackbird" or "Mean to Me" with the musicians she had befriended.

"I have been singing a lot of these songs a cappella since Frederick's Music Lounge, since the hootenanny there," Bauer says.

While the bulk of the record is stacked with selections from the Great American Songbook, Live in the Living Room opens with its most outre moments, beginning the set with the sole original song, "Kissin' in the Bushes." The lyrics consist solely of the title's four words, but the song gives Bauer a moment to explore the resonant and dissonant quality of her instrument through scraping bow work and a languid walk-down of the scale. A brief instrumental interlude follows, allowing Bauer's bass a wider frame and providing space for her bandmates to gradually and idiosyncratically introduce themselves. She puts down the bass for the reminder of the set, but her first standard, the Burton Lane/Frank Loesser composition "I Hear Music," is performed a cappella. Given the fairly conservative approach to these well-known and oft-sung chestnuts, Bauer's pacing of the set shows her willingness to challenge and re-orient.

When asked why these songs from the 1930s and '40s appealed to her, Bauer relates the song selection to her visual artwork. "I'm kind of a traditionalist in that I don't use acrylic paint; I only use oil on canvas, and that's old-school. I'm a purist when it comes to that," she explains. "While my visual work covers lots of different topics and genres, this concept of paying homage — I think is why I love singing these standards." Bauer has taken inspiration from the Hudson River School style of painting in her work, what she refers to as "honoring historical periods of time and not reinventing what isn't broken."

"I think being able to riff on something that's so historical is interesting to me," Bauer says.

The "Living Room" in question is a private space in Benton Park that hosts frequent house concerts, and on this recording it offers both ambiance and intimacy for Bauer and company's performance. She talks of the "sleepy, speakeasy tradition" of these songs as being something that attracted her to the standards. The live recording, done in front of a friendly and respectful crowd, adds to a bit of that ambiance. As a listener, you're more likely to feel like you're experiencing these songs from the back of the room rather than from a front-row perch. That cuts into the clarity of Bauer's vocals in particular, but the recording transmits a bit of the buzz and clatter of a thrilling live performance.

For Bauer, taking a left-turn into vocal jazz was inspired, in part, by hard lessons of aging, mortality and the sense of carpe diem that often follows close behind.

"What brought me back to St. Louis was my dad's condition — he's got ALS. So for me to feel proud of myself as an artist I have to think of everything that I do as art," she explains. "That music piece is one element of 'life as art.'

"I would like it to be a lesson for other people, that the monotony of the 9-to-5, you've got to entertain yourself outside of that somehow," Bauer continues. She has designs on establishing a weekly gig for her and Black to continue playing in this style. "We all have bills to pay, but these art forms that exist in our lives are here to make our lives way cooler."