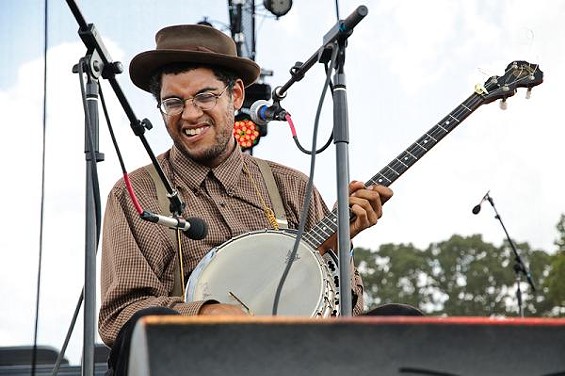 Carolina Chocolate Drops played at two in the afternoon to an enthusiastic, attentive audience. This wasn't a surprise: The trio's old-time string music is a popular draw in St. Louis. (In fact, CCD is coming back to play the Sheldon on October 20, and tickets are on sale this morning, August 30, at 10 a.m.) Banjo, fiddle and clattering percussion buckled together, and the band members took turns in the vocal spotlight; the crooning harmonies and lead melodies were as vintage-sounding as a crackling 78 RPM record.

Before many songs, the band members took turns explained the origins of and history behind them - a thoughtful touch that put the music in context. Its explanation of "Genuine Negro Jig" (also known as "Snowden's Jig," in honor of the Snowden Family Band, an Ohio-based African-American music group of the 1800s) in particular was illuminating. The historical conversation then spawned observations among the band members about how music brings people together, regardless of skin color - and how people are much more open to CCD now than they were five years ago.

And in fact, the group is adept at honoring tradition from all eras. Covers of Johnny Cash's "Jackson" and a snippet of Chuck Berry's "Maybelline" - both sure-fire ways of pleasing a local crowd - succeeded. The set ended with another cover, the band's beat-heavy take on Blu Cantrell's obscure radio hit, "Hit 'Em Up Style (Oops!)," on which Rhiannon Giddens showed off her pitch-perfect vibrato.

Gentleman Auction House turned in an entertaining mid-afternoon set of its own. Even after taking most of the year off, the band sounded well-rehearsed; its chirpy, fairy-dusted pop grooved, hooked and shimmied in all the right places. Fan-favorites "Call It Casual," "I Sleep in a Bed of Scissor Arms" and "New Moon" all made appearances. The new songs GAH played were moodier, heavier with keyboards and not quite as peppy; one recalled Passion Pit's squealing dancefloor burners. The direction is an interesting one, especially when considered in conjunction with pop music's fascination with electronic textures. It'll be interesting to hear what else the band comes up with when it resurfaces.