LouFest, Day Two: She & Him, A Review and Setlist

Jon Gitchoff
Zooey Deschanel of She & Him. More photos from day two are up.

A tip of the hat goes to the LouFest organizers for choosing She & Him to close out the two-day festival. It's almost as if they knew the sun would descend and bring in the perfect summer breeze to complement M. Ward and Zooey Deschanel's timeless, breezy pop standards. The pair's wholesome, soothing sound provided the perfect backdrop to a particularly gorgeous night.

I would guess that among the thousands in attendance, there were quite a few wondering if this Zooey D., the Hollywood actor, was as talented as She & Him's albums let on. I mean, let's be honest: it's fairly risky for an established actor to cross over and try their hand in music. Heck, almost nobody has pulled it off without enduring some sort of embarrassment or ridicule. Amazingly enough, Deschanel has seemed to prove to be the exception.

Backed by an ever-so-sturdy rhythm section, an extra guitar player and a couple backup singers, she led the band through twenty-plus songs of pure pop bliss, and hit every note with ease. But even as her voice barreled through Forest Park with the confidence and poise of a veteran indie pop songstress, you had the sense that she's still getting used to the "lead lady" role. Deschanel let Ward do most of the between song talking, and seemed a bit anchored down early in the set. In all fairness though, she definitely had her hands full: If she wasn't strumming away on her mandolin, she was laying down durable piano chords, or layering the sound with fervent tambourine tapping.

Although Deschanel offers the face and voice operation, one would be remiss to neglect the driving force behind She & Him: the elusive and mysterious M. Ward. Hiding behind his custom Gibson Johnny A. guitar, Ward helped navigate the seven-piece band through the set while delivering soothing back up vocals and plucking away reverb-soaked, Chuck Berry-inspired solos. He and the band even treated the crowd to a couple songs ("Rave On," "Magic Trick") from his own catalog. These actually sounded every bit as good -- if not better -- than when Ward plays them at his own shows.

Some of the most memorable moments of the set came when both Ward and Deschanel sang together. This was clear when the band played "Ridin' In My Car" and the crowd let out a noticeable cheer as Ward broke into his respective verse. After a solid closing sequence of crowd sing-alongs ("Don't Look Back," "Why Do You Let Me Stay Here?" and "Sweet Darlin'"), the band exited the stage and presumably gauged St. Louis's desire for an encore. Fortunately, we passed the test and the band came back out and treated the crowd to a couple more songs. Before their final song, Ward dedicated the number to "the greatest guitar player to ever live." From there, he ripped into a rousing version of Chuck Berry's "Roll Over Beethoven," which served as the perfect closer to the inaugural LouFest. Here's to many more. 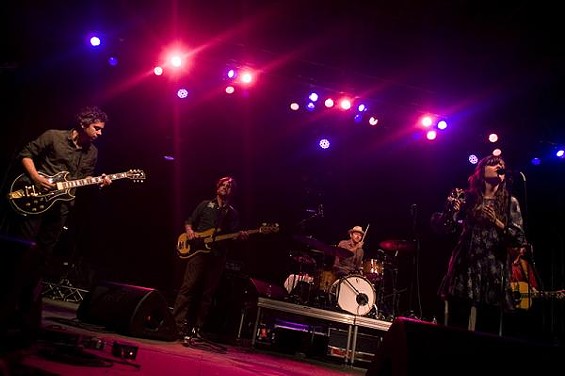 Setlist: I Was Made for You Black Hole Thieves Lingering Still Me and You Take it Back Home Ridin' In My Car Over It Over Again Rave On (M. Ward song) Change is Hard I Thought Magic Trick (M. Ward song) Gonna Get Along Without You Now In the Sun Don't Look Back This is Not a Test Why Do You Let Me Stay Here? Sweet Darlin ---- Encore ---- Fools Rush In Rollover Beethoven