Here's one of your frequent updates on the Lou's own Ludo: The quintet just reached #8 on Billboard's Modern Rock Tracks chart this week, while the album You're Awful, I Love You, last week reached No. 5 (with a bullet!) on Billboard's Heatseeker chart, which tracks albums that have never appeared in Billboard's Top 200 album chart. (This week it's at No. 7, sandwiched between Bon Iver and Uh Huh Her.) "Dead" has also sold 72,000 digital copies, and Clear Channel Radio named Ludo the Alternative “New! Featured Artist."

A press release also buries the lede that the cover artwork of Awful -- which bassist Marshal Fanciullo created -- will appear on 333,000 cans of Arizona iced tea.

I know I've said this before, but really, this album cover? Cute overload. I'd buy a bottle of iced tea with this on there, and I don't even like iced tea. 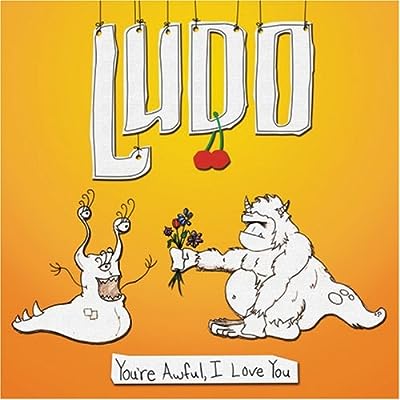 And this shirt? Needs to remain in stock in a women's small. Hear that, Ludo? By the time you come back and open for Relient K on October 30 here in town at the Pageant, please still have them. I have $15 here with your name on it.