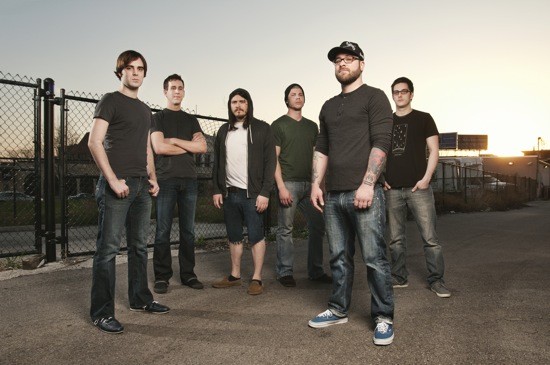 If hardcore, metal and post-rock had a child, their rebellious offspring might be Machree, a band whose music blurs many genre lines but never comes across disjointed. Machree has an EP coming out in July, but there's no need to wait: The band closes out our outdoor stage this Saturday. It also has a particularly entertaining Twitter account, and one hashtag does Machree justice: #noriffraffjustriffs.

Machree plays at 8:15 p.m. on the outdoor stage at 11th and Washington

Kelsey Whipple: You're working on a new EP right now. What does it sound like?

Mike Judy: It's called Changer, and it should be out July 15 .We tried to keep our basic foundation and change time signatures here and there but push ourselves to make it complex musically. We were very influenced by bands from the '90s like Soundgarden. We changed structure this time, so overall the EP is more up-tempo. We had a few songs that were heavier, so we cut those out and went with everything that was more upbeat. It's just a big rock record.

Machree seems to place a lot of importance on word of mouth from other bands. What kind of image do you hope to put out through recommendations like the ones on your site?

We thought it would be cool if people saw that great musicians from other parts of the country spread the word together. If someone hasn't heard us before and isn't sure what to think, we aren't targeted to one specific demographic. If someone's on the fence but they like this person from this band, they might like us. If they don't, they can listen to the guy from Chiodos instead. It's important to us to get people with totally different sounds because if they all approve, that's a cool thing.

What made you guys become so active on Twitter these past few months?

The Internet presence is always a new thing. Our manager told us that we need to start getting out on Twitter. We had a decent amount of MySpace friends, but that started dying, so we had to move on. We aren't the type of band to post a Facebook status or Tweet asking someone what their favorite ice cream flavor is or what movie they're going to see. We don't do anything that we don't think is going to interest anyone. The last few months, we've had reason.

Some of the Tweets are noticeably stranger than others. What 's the story there?

It depends on what kind of night it is on tour and what is consumed. Marcus or Pat get on there sometimes and write something ridiculous.

Is there a story behind the band's name?

When it started, we had six dudes in our band. We couldn't find something that all six of us would agree on, so we got a dictionary out and started looking for cool words. We should have known that day that nobody would ever pronounce it right because no one could even then. Someone once called us Mach Three like the Gillette razor. It means "my heart" or something in old Irish. As cheesy as it sounds, "with heart" is based on a feeling, and as we've grown as a band, we're really proud of our band name because that's how we write our music. We're not gimmicky. We actually just released a band shirt that says "We don't scream." It's probably the only time we'll ever release a tank top, but it's tongue-in-cheek.

Rumor is the new EP comes with some crazy artwork. What was the art concept?

Our friend Matt Manning is a terrific graphic artist. He used to play bass in From First to Last, and he's done a lot of incredible work. We told him that Changer is about a shape-shifter of sorts. We didn't want to call it Shapeshifter because there's a Marcy Playground record named after that, but this is close enough. It's just this big creature-man-beast thing made up of all the elements together. It's a lot like a Mastodon artwork. It's really intense. Originally, we wanted to take pictures of everyone from the band and combine everyone's face parts - Brian's nose and Patrick's eyes and my mouth, whatever. It was a good idea at first, but we put it all together and it just looked like an ugly dude. If you were going to Best Buy, you'd see a nerdy ugly guy with classes. Our manager said it looked like a really bad white R&B album.