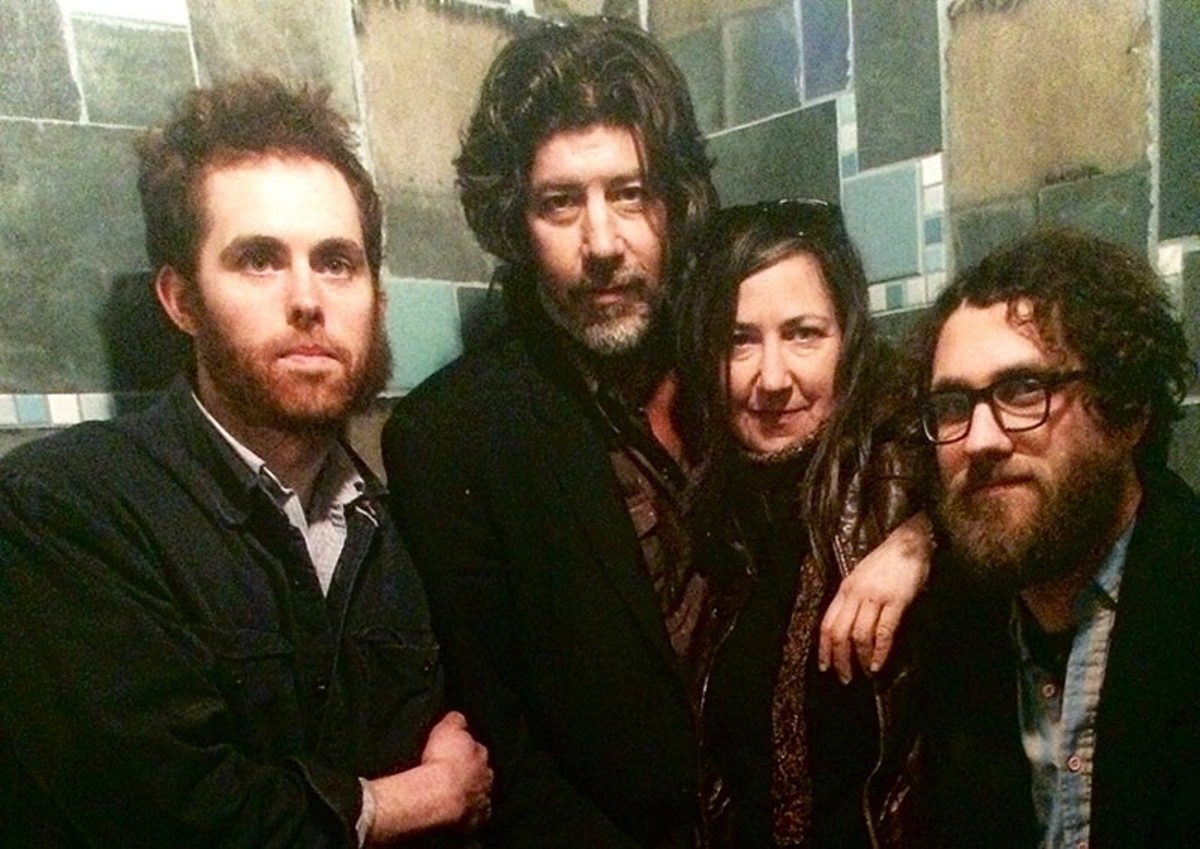 Anne Tkach, third from left, passed away tragically in a house fire in April 2015. PHOTO VIA THE BAND

Tkach's sudden, shocking death in an early-morning house fire on April 9, 2015, appeared to truncate the trajectory of Magic City and a host of other local bands with which Tkach was associated. The loss of a beloved, big-hearted and musically dexterous presence reverberated through many corners of St. Louis, but Tkach's closest musical allies — in Magic City as well as the folk-and-roots group Rough Shop and the blue-eyed soul band Ransom Note — had to contend with their groups' uncertain future along with personal grief.

Nearly two years after Tkach's passing, a reconstituted Magic City will be taking the stage one last time this week as the band releases La Vie Est Chére, a six-song EP composed largely of recordings made with the band's original lineup. On a mid-Sunday rehearsal break over tacos and tortas in the backyard of the house that Tkach and Hesed once shared, members of the band share their memories of Magic City's beginnings and their hopes for this final release. For this show, Kiki Solis will take Tkach's spot on bass guitar and Drew Gowran will fill in on auxiliary percussion.

Hesed, Tkach's long-time partner, explains that the bulk of these recordings were done in 2012 and 2013 with the intention of making another full-length LP. "The reason it didn't come out earlier is that we kept thinking we would write a couple more songs and finish it out, and then..." Hesed trails off, knowing, perhaps, that the end of that thought doesn't need to be spoken to be understood.

For the album release show, the band has pressed a limited run of 300 vinyl copies. That release, along with this week's show, is all that the members of Magic City have planned for the band.

"This is the final thing; we're not planning on being a long-term project or anything," says Hamon. "But I think because the other songs are so solid — we play them well. The title track ["Life is Sweet'] was one take, one mix. That's all we got, you know, and it was a really strong track. It's kind of the last thing Anne recorded on, as far as I know."

Hesed concurs: "As far as I know, this will be the last work of hers to come out. It just seemed a waste having it just sit on a disc somewhere and nobody hear it when the material is worth putting out there and, you know, having people hear it. It seemed more honorable to get it out there than to have it sit around and sort of fester and be frustrating for us, I think."

"We just had to figure out how to get it out of the bank because our smart one, our banker, was not in the picture," recalls Hamon. "That also meant we didn't spend it on anything besides finishing this."

Along with serving as de facto manager and logistics operator for the band, Tkach was a vital part of the band's bottom-heavy sound, a musician who provided sometimes subtle, sometimes ferocious underpinning to its riff-laden style.

"The bass player is the anchor and holds it together, and that's the glue that Anne definitely was, but she was so much more," says Bulawsky. "She was also a singer and played drums and percussion. She had an innate sensibility. She was also honest about it; if something wasn't going right, she wasn't just gonna play stuff that wasn't working. She let you know, which I always liked."

The opening instrumental, "Pibloktoq," shows Magic City at its most muscular, with its roiling rhythm and a circular, barbed riff that takes the technique of math-rock into stoner-groove territory.

"They're tough songs — they're very technical," says Meyer, who, as the group's drummer, is tasked with corralling the song's shifting rhythm. "It's challenging. That's what I always appreciated about it."

"They're challenging, but they don't sound that way," Hamon continues.

For Bulawsky, whose full-bodied commitment to the role of the band's frontman was Magic City's most immediately magnetic component, the band gave him a chance to add drama and pathos while playing the part of a growling, leering carnival barker and debased revival preacher.

"For me personally, it was the first time I had played in a band where I was able to play and sing material that someone else had written," says Bulawksy, noting that Hesed penned many of Magic City's lyrics, including the songs "Speckled Bird" and "Life is Sweet" on the new EP.

"It gave me a chance to get behind the music in a different kind of way, which I really enjoyed," continues Bulawsky. "If I had written those lyrics I might be singing them in a different way or be more precious about the interpretation."

"That was something I really enjoyed about it also, was writing songs that I didn't have to sing. Those words were never gonna come out of my mouth," says Hesed. "They were given to somebody else to interpret and butcher and take elsewhere. It was an interesting process to write for somebody else."

While Hesed was content to do more writing rather than singing on previous Magic City recordings, the emotional centerpiece of La Vie Est Chére finds Hesed on the microphone for a cover of Leonard Cohen's "Tower of Song." Hesed first performed it at a tribute show in Tkach's honor in July 2015, and the song, which ruminates on a life spent in supplication to music, struck him as proper send-off to his companion.

"It seemed very appropriate," Hesed says. "I could pick out my favorite lines from the song, but I see it as paying tribute to Anne as a permanent resident in the Tower of Song now."