Matthew Sweet Is Coming To The Duck Room To Perform Girlfriend [Update: Sold Out!] 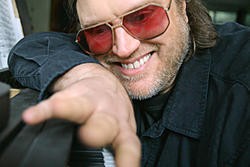 Update, 9/28:This show is now sold out. You've got a little over two weeks to dig through craigslist or buddy up with a ticket-having friend.

Matthew Sweet's Girlfriend is twenty years old, and to celebrate, he's playing the album in its entirety at Blueberry Hill's Duck Room on October 15th. He'll also play some songs from Modern Art, his latest.

Sweet started his music carrer in his hometown of Lincoln, Nebraska, before moving to Athens, Georgia; his resume includes a collaborative project with Michael Stipe. Girlfriend is a power-pop masterpiece and remains Sweet's most successful and acclaimed album to date.

These old favorites tours aren't always quite what people hope they will be (see: Weezer), but let's just say we're way more than willing to chance it here.