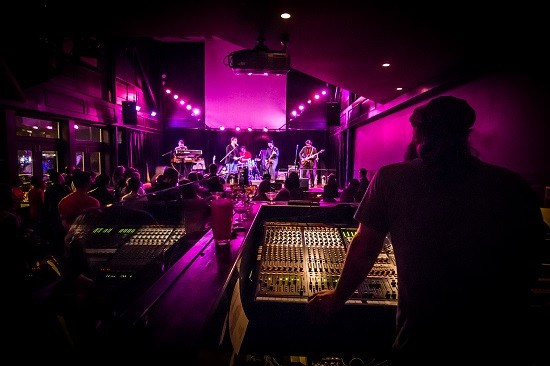 "Oh my God! Did you see the Architects at the Demo this weekend? I can't believe how great they sounded! Favorite show of the month, hands down!" -- some concertgoer.

We hear stuff like this a lot, for every type of music and in every club or concert hall. And naturally, on-stage talent plays a major part in how much an audience enjoys a show. But a live sound engineer is a coconspirator who contributes a great deal to that musicgasm in your ears. The dude sitting behind you at the table with all the flashing buttons? He's not playing with his massive vintage Lite-Brite (though that would be cool). Nope, he's the band's secret weapon for achieving just the right balance of voice, bass, reverb and a million other things that make your favorite act sound so smooth.

See Also: The Top 15 Things That Annoy the Crap Out of Your Local Sound Guy

Despite being integral to any production, live sound engineers don't get enough mad props for what they do. So we asked a few of St. Louis' long-time sound guys about why they toil at such a thankless job and what they bring with them that makes everyone sound so damn good.

Years in the business: Nine or so. I started mixing weekends at the Way Out Club in 2003, I think.

Venues: I'm the production manager at Off Broadway mainly, but I pick up some freelance gigs every so often.

Favorite piece of live gear: A positive attitude. A show just runs better when everyone's on the same team. A good flashlight comes in handy, too.

Favorite band you've live-mixed: I couldn't choose; every show is different and has its own rewards. I have gotten a few thrills, though, working with bands I admire. Dale Watson is a pleasure to mix. Murder By Death, the Spring Standards and Ha Ha Tonka are friends. Joe Pug puts on one of the most amazing shows you'll see. There are also my St. Louis friends I've worked with for years, like Kentucky Knife Fight, Pokey LaFarge, Fattback, the Blind Eyes, Rats & People and so many more.

Best tip for making a show sound good: Don't make it any louder than it needs to be. The name of the game is sound reinforcement. Nobody is impressed by the compression you have on the snare drum. They want to hear the words.

One thing the public doesn't understand about your job: I don't have total control of the way a show sounds. If the guitar players are taking paint off the walls or the drummer is going after the cymbals like they owe him money, it's going to be hard to get the lyrics out. I'll do what I can, but there are limits to what a PA can do.

Worst thing that's happened while working a show: Total system failure. I've had it happen due to a faulty console power supply, due to a fog machine tripping the main PA breaker (I'm looking at you, Bug Chaser!) due to jackasses messing with stuff they shouldn't. The list goes on. There's nothing like watching a stage go dark in front of a sellout crowd and having to fix it immediately.