Music at the Intersection to Return with Expanded Outdoor Footprint 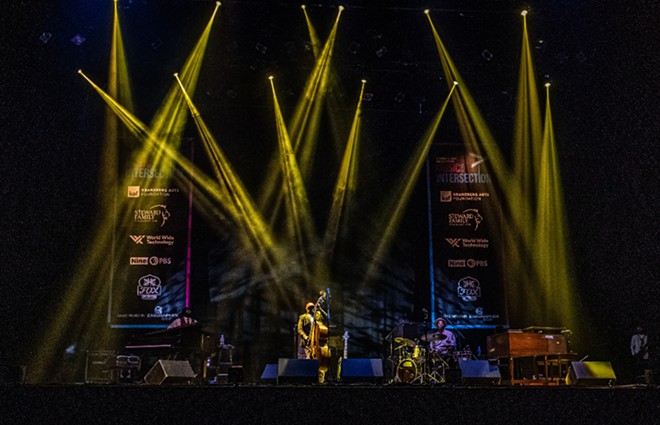 PHILLIP HAMER
After facing COVID-related challenges in its inaugural year, Music at the Intersection is making its triumphant return in September.

After an inaugural year that was complicated by the ongoing nightmare that is the COVID-19 pandemic, Music at the Intersection is now officially setting its sights on 2022.

Arguably the most ambitious music festival in St. Louis — and RFT's pick for the best such event of 2021 — the festivities are slated to once again take place in Grand Center on September 10 and 11. This year, however, the festival's outdoor footprint has been expanded, reflecting what Kranzberg Arts Foundation Executive Director Chris Hansen says is closer to the organizers' original vision.

"Originally, we wanted an indoor/outdoor experience, so that people can enjoy all the district has to offer," Hansen explains. "But with COVID, when we were able to bring this thing to life last year, we were without the ability to do street permits, and we could only work in limited capacity."

But with things on the pandemic front looking like they'll be more open this year (fingers crossed!), the festival grounds have grown, stretching across Washington Avenue east of Grand and featuring three stages, a host of food trucks and a "Mural Market" where local artists and vendors will be able to sell their wares.

In addition to the main musical performances, which will take place from 11 a.m. to 9 p.m. Saturday and Sunday, the fest will see a series of after-parties inside Grand Center venues the Fabulous Fox, the Sheldon Concert hall, the Grandel Theater and Jazz St. Louis. Those events will also feature live music but will be ticketed separately, with festival-goers able to purchase at a discounted rate.

Also new to festivities will be a Friday event at .Zack (3224 Locust Street) geared toward musicians and others in the music business. The Midwest Music Summit will feature five speaker panels that aim to offer professional development and mentorship opportunities, led by industry professionals.

And while performers at the festival have yet to be announced, last year's slate of acts should inspire plenty of confidence. A key goal for organizers was to bring in artists with St. Louis ties — area natives Layla Hathaway, Keyon Harrold, Nikki Hill and more all performed last year — as well as give opportunities to local artists. While he's cagey about the specifics, Hansen says this year's lineup, which will be announced in the next couple weeks, will follow a similar philosophy.

"It's going to be a festival that St. Louis is ready for and deserves," he adds.

For more information about Music at the Intersection, visit musicattheintersection.org.