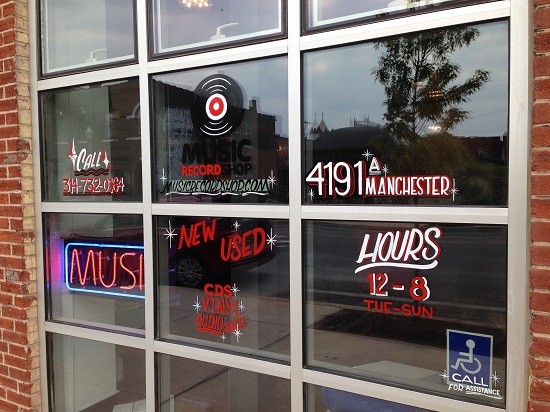 Photo by Rick Giordano
Music Record Shop opened in the Grove in August 2014.

Nestled between two of the Grove's biggest venues, Music Record Shop feels hidden, like some sort of secret utopia for new and used vinyl. The tiny space is packed wall to wall with wax and a small but solid stock of cassette tapes. While some stores specialize in old rarities, this shop brings the latest and greatest on a weekly basis. So to promote the newest releases on vinyl, Music Record Shop has partnered with the Demo to bring New Release Happy Hour, a three-hour listening party with discounts, giveaways and drink specials every Tuesday.

"We really hope to become a dependable spot for picking up new music releases. We also hope to build a community event for music lovers to come out, hang and talk new music," says Daniel Sexauer.

While he handles typical clerk duties, Sexauer also plans events and works through social media to engage the local music community. He recently developed the idea for New Release Happy Hour with Brandon Cavanagh, managing partner at the Demo.

"As the event develops, we hope to maybe give away other special promotional items, pending availability from labels/distributors. If there's ever an opportunity to include live music onstage at the Demo from locals or others releasing new music, that could be cool too," he adds. Both spaces are connected by a single door, allowing for music fans to move freely between the bar and the store.

The happy hour takes place on Tuesdays from 4 to 7 p.m, pending any early sound checks at the Demo. Promotions include giveaways and 10 percent discounts on new releases (15 percent for pre-orders). Sexauer hopes to build the event into a long-term St. Louis staple.

"Although exact dates haven't been released yet, I'm particularly excited to hear new music from Radiohead and My Morning Jacket this year. More immediately we are looking forward to new tunes from Death Cab For Cutie, Sufjan Stevens, Jeff the Brotherhood, Umphrey's McGee, Alabama Shakes, Will Butler, Modest Mouse, Toro Y Moi and Unknown Mortal Orchestra. 2015 is going to be a great year for new music," says Sexauer.