(Sorry this is late; again, busy week, and it was such an amazing show it took awhile to put into words.Top picture courtesy of salon.com, bottom from msnbc.com. -- AZ)

Sunday night was my first time seeing Neil Young, although he’s always been a constant musical presence in my life. My parents were (and are) huge fans of Crosby, Stills, Nash & Young, and one of the first CDs my dad ever purchased was Young’s solo gem Harvest. In the 1990s, the flannel-clad, wild-haired singer was the peer of my musical idols; he famously appeared with Pearl Jam on the 1993 MTV Video Music Awards, brought Sonic Youth on tour as openers and ended up recording with Pearl Jam, R.E.M. and others.

Balancing the past with the present – while embracing the future -- is Young’s forte, judging by this mesmerizing show at the Fox. As noted in this excellent New York Times piece, Young hand-picked the venues on this tour and insisted that the lights be incandescent, with gels changed by hand, the old-fashioned way. Appropriately, songs from his new Chrome Dreams II (for the most part) fit perfectly with cuts culled from his extensive back catalog.

The first hour of the show featured Young solo, a guitar or piano. Wearing a smart, slate-grey suit, he strode onstage to a standing ovation, sat down and picked up a harmonica, and launched right into “From Hank to Hendrix” – a song, appropriately, about his guitar.

In fact, the 62-year-old plays the instrument like a grandfather telling his grandchildren a story: effortlessly fluid, full of expression and informed by years of experience. (At one point, he even patted one of his guitars – which during this section were arranged around his chair in a circular array – on its head.) His guitar looks like an extension of his body, as his entire self rocked and grooved back and forth in seamless rhythm with the songs. 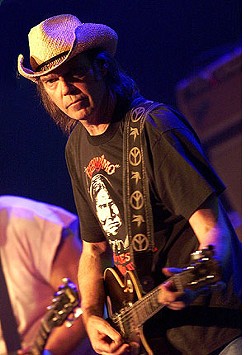 The stripped-back affair emphasized that Young carries the weight of the world in his voice, thus drawing from a sweet, inner vulnerability that's as rich and meaningful as the words he sings. A beautiful, spare version of “Ambulance Blues” and clear crowd-favorites “Harvest” (which he played on the piano), “After the Gold Rush” and “Heart of Gold” were particularly enthralling. The latter tune -- which, appropriately, he played as beaming yellow spotlights shone on him – was completely moving, the perfect acoustic embodiment of our wistful, autumnal Indian Summer.

Young’s dry wit lightened the mood of these weighty tunes, though. He stopped sheepishly somewhere in the middle of “Gold Rush” after he lost his place in the song, distracted by people yelling things during it (including, bizarrely, “Neil for president!” – yo, he’s a Candian citizen and can’t be our fearless leader, no matter his political grandstanding). This prompted between-song banter about how he has to take care of his songs – and how the lesser-known ones naturally draw fewer reactions such as this.

Just after launching into “Love is a Rose” – a song Linda Ronstadt frequently covers, something he cheekily mentioned by referencing a long-ago tour they did together, when she apparently was “wild” – Young stopped the song to admonish the crowd. “You guys should be clapping your asses off!” Cue wild cheers, thunderous applause.

The same thing happened at one point as he took a swig from a beer. Without missing a beat, he dryly said: “And now a word from our sponsors.” Applause. “This show is brought to you by water!” (Was this a nod to Sammy Hagar’s Miller-AB rumble from the other night, or to Young’s own long anti-corporate history -- see “This Note’s For You”? Unclear.)

The electric set was just as moving, starting with a rowdy version of “The Loner,” a song from his 1968, self-titled, debut solo effort. While a few songs from Dreams didn’t really hit (the weak lyric stomper “Dirty Old Man,” spare-blues of “The Believer”), a barnstorming, raucous “Spirit Road” was magical; the more folk-country-influenced “Oh, Lonesome Me” and “Winterlong” were also stunning. Credit this acuity to Young’s backing band, who have played with him for years: guitar/pedal-steel player Ben Keith (who dates from Harvest), bassist Rick Rosas and Crazy Horse drummer Ralph Molina.

Young and his band’s intuitive synergy emerged on the night’s true highlight, Dreams’ “No Hidden Path.” Ten-plus-minutes on the album, the live version at the Fox was at least 20 minutes long. (Anyone time this?) And frankly, it was absolutely astounding, as the song kept stretching-out and bending into different shapes, a relentless hurricane of noise. Back on the electric, Young hunched over like a carpenter carefully working on his craft; his fingers moved effortlessly over the frets as he soloed and jammed, adding bluesy distortion, improvisation and howls of chaos that were trance-like. The stage lights – a warm rainbow of yellow, orange and green lights – added to the ambience, as the band watched Young’s movements attentively, and adjusted their own improv accordingly. A testament to Young’s skills, it was also never boring.

The ending, though, was perhaps one of the weirdest in recent memory. After the encore -- a solid version of “Cinnamon Girl” and a storming “Cortez the Killer,” -- a gong rolled out. A man dressed in yellow genie pants, a red silky shirt and green sultan hat walked out, banged the gong as Young and co. launched into “The Sultan.” He did the same throughout the song -- and after it was over, that was it. Show over.

It was an extremely curious way to end the show – especially after the riotous two-song encore -- but entirely appropriate for an artist who has always followed his own off-the-beaten path.

It’s worth noting that the stage setup was sparse and quirky, and looked like a charming antiques store. Random assortments of letters and numbers lined the back, and little flourishes – a tie-dye-painted piano, a pirate flag on top of the drum mic – added flourishes. A statue of a Native American sat stage left, next to an easel that held paints with the letter “P” (for Pegi Young, Neil’s wife and the opening act), “N” (Neil’s acoustic set) and then a series of paintings depicting each song played during the electric set. These were brought out by a painter wearing a jaunty red jacket and carnival-vaudeville hat, who was actually in the back painting as the show was going on. (Shades of St. Louis’ hip-hop-meets-art nights.)

Setlist, courtesy of my own scriibbles and this great site:

Acoustic: “From Hank to Hendrix” “Ambulance Blues” “Sad Movies” “A Man Needs a Maid” “No One Seems to Know” “Harvest” “After the Gold Rush” “Mellow My Mind” “Love Art Blues” “Love is a Rose” “Heart of Gold”

Electric: “The Loner” “Everybody Knows This is Nowhere” “Dirty Old Man” “Spirit Road” “Bad Fog of Loneliness” “Winterlong” “Oh, Lonesome Me” “The Believer” “No Hidden Path”