Nelly Has The Number One Song In The Country.... Nine Years Ago Today 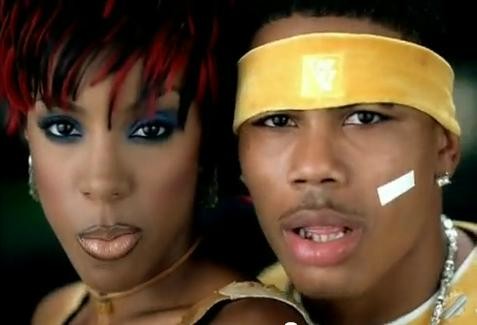 The early 2000s were Nelly's salad days, a time period where the University City rapper was known more for slinging out hits than his efforts to take over Branson or for dealing with burglars at his Wildwood home.

An example: Nelly had the number one song in the country nine years ago today with "Dilemma," a finger-snapping slow jam duet with Destiny's Child alum Kelly Rowland. While "Hot in Herre" was arguably the Nellyville's signature track, "Dilemma" was actually the more successful song in terms of Billboard charting. "Dilemma" managed to stay at number one the Billboard Hot 100 charts for 10 weeks in 2002, as opposed to seven weeks for "Hot in Herre" during that same year.

Even though he had a nearly-endless string of hits over the 2000s, "Dilemma" was Nelly's highest-ranking song on Billboard's Hot 100 for the 2000s. (That list features a Nickelback song and two Black Eyed Peas tunes in the top ten, perhaps showcasing how cringe-inducing popular music could be during that decade.)

"Dilemma" marked a Robert Frost-like diversion for Nelly, whose earlier mainstream success was built primarily on upbeat anthems such as "Country Grammar," "E.I." and "Ride Wit Me." "Dilemma" instead took Nelly relatively close to adult contemporary territory in terms of musical tone and subject matter.

In "Dilemma," Nelly tries to woo an already-taken Rowland. But things are complicated: Nelly is hesitant to break up a relationship, while Rowland is clearly smitten with the enticing rapper. That in a nutshell is the dilemma in, um, "Dilemma."

So what's "Dilemma's" lasting legacy? It's tough to say. Unlike Nelly's three other songs that went to number one on the Hot 100 - "Hot in Herre," "Shake Ya Tailfeather" and "Grillz" - "Dilemma's" awkward subject matter probably isn't appropriate at celebratory functions such as weddings. And it's not exactly dance-y enough to be played a club.

In-depth analysis aside, "Dilemma" was a high-point in Nelly's overwhelmingly successful 2002. The rapper may never have another year where two of his songs are atop the Hot 100 charts for 17 out of 52 weeks, but stranger things have happened in the pantheon of pop music.

-- "Dilemma" includes a sample from Patti LaBelle's "Love, Need and Want You."

-- What song ended up permanently knocking "Dilemma" off its perch? "Lose Yourself" by Eminem," which ended up being the first rap song ever to win an Oscar for Best Original Song.

-- "Dilemma" won a Grammy in 2003 for Best Rap/Sung Collaboration. Nelly won another Grammy that year for Best Male Solo Rap Performance for "Hot in Herre."