Nelly to Work With a Bee On Upcoming Project 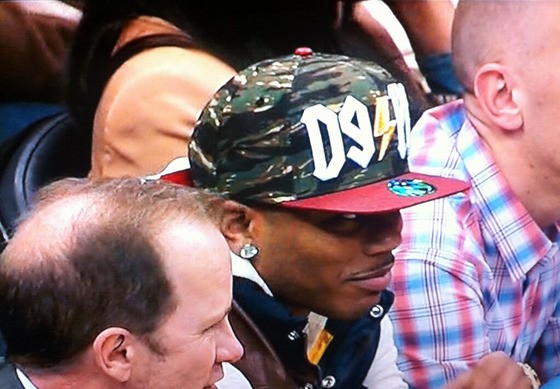 On Friday our sister paper in Minneapolis, the City Pages published this story chronicling the Minneapolis sightings and Twitter-ings of St. Louis' most famous St. Lunatic, Nelly. According to reports, Nelly is in the midst of finalizing a deal with Minneapolis-based General Mills cereal (the hashtag "mustbethehoney" has been spotted in use as well, leading one to believe that Cheerios' advertising may be in for a Nelly-inspired revamp).

See Also: -Nelly and Crew Busted in Texas with 36 Bags of Heroin, 10 Pounds of Weed and a Loaded Gun

Earlier on there was a picture in rotation of Buzz, the famous honey-bee logo of Honey Nut Cheerios, on a poster with Nelly's face and the hashtag "mustbethehoney," but said photo has since disappeared from the internet, likely owing to the fact that the deal is not yet finalized [EDIT: We found it again: https://twitter.com/maehlert/status/304260441801105409/photo/1]. RFT Music has sent e-mails to Nelly's manager as well as General Mills. We will update this post if we hear anything.

According to Nelly's Twitter feed, he arrived in the Twin Cities on Tuesday afternoon:

Just got to Minneapolis MN just a Lil change in weather from HTOWN!!!lolol instagr.am/p/V7YJoSCiiR/

The Twitter associated with the above has since disappeared from the internet, but was the original source of the picture with the bee and the hashtag.

Wednesday saw the rapper eating this ridiculous dessert thing alongside fellow St. Lunatic Ali, followed by a trip to the Timberwolves game versus the Sixers and a meet and greet that he apparently didn't show up for:

This is going to hurt at the gym tomarr but DAMMMM I gotta doit!!!! Brownies whipcream cherrys chocolate... instagr.am/p/V8DG_cCimJ/