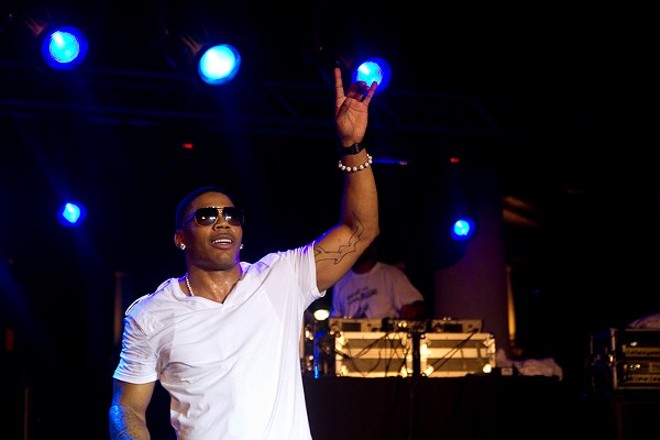 Photo by Erin Kinsella
New details have emerged in the rape allegations against Nelly, real name Cornell Haynes Jr., as the rapper's accuser, Monique Greene, has filed a lawsuit against him for sexual assault and defamation.

TMZ was the first to break the news about the lawsuit, which comes on the heels of an announcement from Nelly's camp that the rapper intends to file suit against Greene.

Late last week, prosecutors dropped the criminal case against him, saying Greene refused to cooperate. A lawyer for Greene said in a statement that Greene chose not to pursue those charges after she became the subject of harassment and threats from Nelly's fans and supporters. Her civil suit makes it clear: She continues to stand behind her allegations.

According to the lawsuit, Greene worked as a host at the White River Amphitheatre in Seattle, where Nelly performed on October 6, though she was not working the night of the concert. She claims that she was hanging out with Nelly and his camp after the show when Nelly invited her to join him at an after-party. She agreed, and got into an SUV with the rapper.

The suit alleges that Nelly then forced Greene to have sex against her will, both orally and vaginally. Greene claims she tried to get him to stop, also saying he needed to wear a condom, but he refused and continued. When it was over, Greene says she screamed that she wanted to get off the bus, prompting a member of Nelly's entourage to push her out the door. She claims Nelly then threw a $100 bill at her and said "bye bye."

Greene then called 911. She claims Nelly continued to taunt her from the bus as she stood waiting in the parking lot. When police arrived, they took Greene to a medical center to complete a rape kit, and arrested Nelly for second degree rape.

"It comes as no surprise that Ms. Green filed a lawsuit against Nelly seeking money after we announced our intention to hold her accountable," he writes in a statement. "We always believed her accusation was motivated by greed. Nelly will answer and proceed with a counter-suit against her for her outrageous unfounded allegations."

Greene is also suing for defamation, claiming that Nelly's team has worked to discredit her and tarnish her reputation since the beginning, claiming she was only after "money, fame and notoriety."