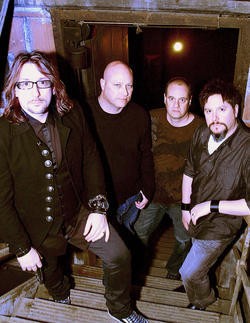 In this week's paper, D.X. Ferris caught up with local metal soldiers Anacrusis, who will be playing live this weekend for the first time since the early '90s. The free, all-ages show is at T. Billy Buffett's (9004 Overland Plaza, Overland; 314-427-1616) and starts at 8 p.m. Read the article here.

The band's website has a veritable treasure trove of MP3s available for download; everything from demos to live cuts to full albums. Above and beyond that, vocalist Kenn Nardi was kind enough to let us post a few songs for download. Two are from the band's new reissues: "Present Tense" comes from Suffering Hour Revisited and "Stop Me" is from Reason Revisited. "Sound the Alarm," in contrast, is an older track; in fact, vocalist Nardi notes that the video was shown on MTV's Headbanger's Ball in 1993.

Prolific hip-hop artist Nato Caliph also checked in with a stellar new song, "Her." Featuring local upstart Bryant Stewart (who's getting some notice lately) and beats by Tech Supreme, the tune is a total throwback to the smooth soul and funk of the '70s. It'll be found on Caliph's upcoming EP, Reach, which is out in May.