DANIEL HILL
Gus Theodorow, Wax Rats' owner, in front of his Cherokee Street shop.
Standing out on a wall behind the counter of Cherokee Street's newest record shop is a particularly eye-catching album. Its cover art features an anthropomorphic beast with the head of a cat and the body of a man, wearing a belt but no pants, and carrying a knife. The band's name is spelled out in near bubble-letter font across the top: Pantera.

"Oh yeah, that's Metal Magic," remarks the store's owner, Gus Theodorow. "That's before Phil Anselmo. We can listen to it if you want. It kinda sucks."

Theodorow tosses the slab of wax onto a record player. And it's true: Pantera's debut studio album does indeed kind of suck. Released in 1983, the record sees the band still in its hair-metal days, back when drummer Vinnie Paul and guitarist Dimebag Darrell were in their teens and plainly obsessed with the music of bands like Kiss and Ratt. Aside from its ridiculous cover art, Metal Magic is a wholly unremarkable affair.

But that makes it the exception at Wax Rats (2308.5 Cherokee Street), a new record store that just opened this summer on Cherokee Street, just east of Jefferson. At present a smaller, somewhat niche affair, the store specializes in punk and metal vinyl — with some serious rarities on hand as well.

DANIEL HILL
"I bet this record shop has two more Rudimentary Peni records than any other record shop in town," Theodorow boasts.

Those records — 1983's Death Church, the British anarcho-punk band's debut, and its follow-up, Cacophony — share shelf space with a litany of other noteworthy albums. Slayer's Haunting the Chapel, an early Hawkwind record and a number of albums by Judas Priest sit alongside Uriah Heep, Faith, 45 Grave, Tragedy, Power Trip, and on and on.

The overwhelming majority of the store's stock consists of used records — much of it from Theodorow's own expansive personal collection.

"I had too many records to ever be able to find what I wanted," Theodorow says. "Even though I'd alphabetize 'em, people would come over and mess 'em up. I was just like, 'I don't need this many records.' We were short on stock, so I just pulled like 500 records out of my collection. A bunch of those have sold; a bunch of original pressings of, like, London Calling and shit like that. Punk rock staples, and a lot of hardcore stuff.

The store's shelving holds a capacity of 4,500 records, Theodorow says, but at present he estimates the shop carries less than half that number. The idea to start a record shop came when a friend brought a huge collection of records into Theodorow's prior business venture, an antique furniture shop on Hampton. Theodorow grew up in the antique furniture business — his dad showed him the ropes — and though it was a reliable way to make money, he was ready to try his hand at something new. Peddling records with his friend-turned-business-partner seemed like a great way out of the game.

DANIEL HILL
"I was totally sick of furniture," he says. "Sick of the business and sick of moving heavy stuff all the time. Records are a lot lighter."

Theodorow and his friend sold records out of the furniture store for a while before getting the Cherokee Street storefront, which was previously home to the Creaky Crow taxidermy shop. But the friend pulled out just before the shop opened, taking his records with him. Theodorow decided to push forward anyway.

He's since teamed up with Tom Maher, whose own Cherokee Street record store, Kismet Creative Center, closed just last year. Wax Rats now carries some of Kismet's former stock, and Maher even mans the register on Sundays. Still, the store's stock is small for the time being, lending the shop something of a boutique feel. But Theodorow is in active purchasing mode, and hopes to have the shelves filled soon.

"I wanna buy as much as possible right now actually," he says. "I'd like to buy more punk; I'd be into buying rap. All kinds of stuff."

DANIEL HILL
In addition to the LPs and EPs on offer, Wax Rats carries a small collection of tapes and CDs. The store also sells patches — Eyehategod and Gism are well-represented — as well as t-shirts (Short Leash, Septic Death, Poison Idea, etc.), sunglasses and even Kangol bucket hats.

"I just kinda wanna focus on punk stuff and whatever I like, really," Theodorow says.

As Metal Magic blares on, Theodorow decides that glam-metal Pantera decidedly does not fit that criteria. He steps over to the record player and pulls the needle off the album.

"This is a pretty marginal fucking record," he laughs.

Luckily, at Wax Rats, that makes it a rarity. 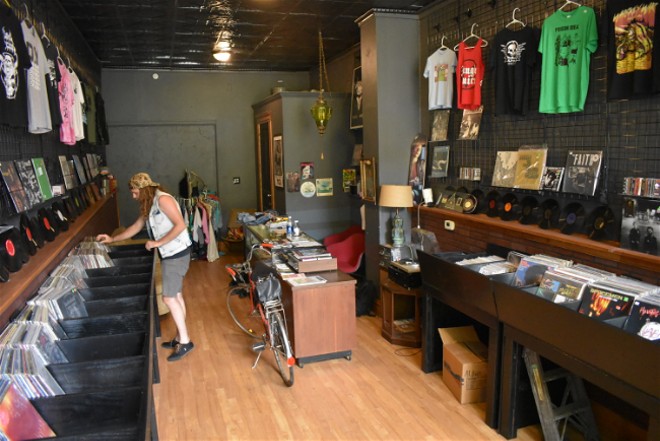