Bruce Springsteen at the Moody Theater at SXSW 2012

1 p.m. SXSW is a time machine, not always dialed towards the future. Though the clubs change names every season, the gimmicks get more and more outrageous -- witness the skyscraper-sized vending machine stocked with minivan-sized bags of chemically-enhanced corn chips whose name shall no more be spoken -- the ante annually increased on the mega-star appearances -- this year, 50 Cent, Jay-Z, Jack White and the Boss -- at some moments the clock spins backwards, and you remember how it all once was.

The year was 2002, a 23-year-old lounge singer was on the radio with a voice like the soft sex of dreams, and Austin was quite precisely buzzing about her. Norah Jones had just released her first album and she was in town playing shows only the industry-connected by and large would hear. Sometimes the machine knows what it's doing.

But on Thursday afternoon at SXSW 2012 she was back, playing a free party outside Waterloo Records, with 1000 people standing in the sunshine to hear her sing with the Little Willies, a country cover band that dates nearly to her first album. The quintet -- Jones on piano, Richard Julian and Jim Campilongo on guitars, Lee Alexander on bass and Dan Rieser on drums -- played old country songs, familiar and not-quite-forgotten, including "Remember Me," "Dangerous Curves," "Tennessee Stud," "Fist City," "Lovesick Blues" and a steamy, dreamy "Jolene." If it were only 1957, Jones might have been a country star, though her ethnicity would have been a catch. Still, her limber, intuitive phrasing and playful country-stride piano work are unassailable, whatever you think about her mass appeal. She and the band killed every song. 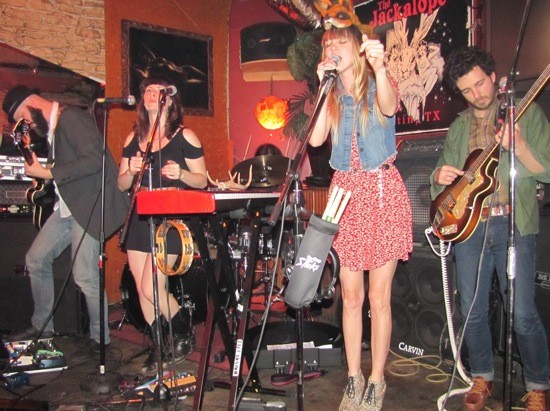 Dana Plonka
The Mynabirds at Jackalope's at SXSW 2012

3:05 p.m. After heading across town to queue up for a Springsteen ticket and wristband -- Bruce was here for a keynote speech and the E Street band was in town for a lottery show at the Austin City Limits Moody Theatre -- I returned to 6th Street and Jackalope's for a set by the Mynabirds. The Saddle Creek band, led by Laura Burhenn, has a new record out in June, and the singer celebrated it by wearing a crown in the shape of a fox on her head. With a click of sticks and a stomp on the stage, the band announced its excellent gospel-punk blues direction, swinging and rocking hard through the new call-and-response "Generals" and the wonderfully Dusty-in-indie-Omaha "The Numbers Don't Lie." How they got such a full, clear sound in a crappy corner bar is a mystery I'll let be.

3:30 p.m. At Red Eyed Fly for the New Shapes day party, I discovered that indie synth-pop, like dubstep, is dying -- and innocuous, predictable bands like Savoir Adore and St. Lucia are leading the death march. I also learned that teen singer Charli XCX is probably a fine lip-syncher but she is not the next Lily Allen.

4:47 p.m. Fighting the bleed-through from the outdoor stage, Ben Howard had his complex guitar tuning in place and lit into "Old Pine," the strongest song from a very strong album Every Kingdom, recently released stateside. The young, handsome UK singer and songwriter is writing and picking his own way into the folk songbook, and if he continues this way, he'll have his own chapter between Drake and Kottke. Sets like this, with so little pretension and so much musicianship and talent, really can still be heard in Austin in the spring.