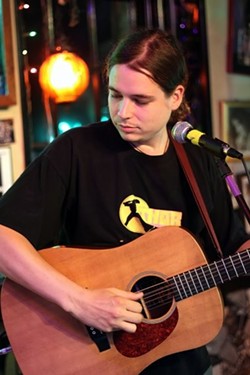 Ask people what they remember most about Dave Hagerty, and chances are they won't mention his genre-bending guitar playing or the bizarre obsessions he sang about in his band, Fattback. What friends recall is Hagerty's smile - a genuine, kind-eyed grin that rarely left his face.

"Dave had the perma-grin," recalls his Fattback bandmate, John Joern. "He looked like he was enjoying life every day no matter what."

Adds Steve Pohlman, co-owner of Off Broadway, where Fattback frequently performed: "If you look at photographs of Dave on stage, that smile was always there. That was consistent - that wasn't an on-stage thing. When you saw the guy, you were gonna see that smile."

According to Hagerty's parents, that sunny disposition revealed itself early. "From birth on, he always had a smile on his face," remembers his father, Brian Hagerty. His mother Diane concurs: "He did. He was always a real happy kid."

Hagerty, 28, passed away on Monday, August 2, from injuries he sustained in a car accident the previous weekend.

The gregarious Hagerty was best known as a member of Fattback, but he played many roles within the local music community. He co-hosted the weekly open mic night at Venice Café, played in the reggae group Ashaka & Ram Jam Reggae, ran trivia nights and taught guitar lessons in Off Broadway's building. Most nights of the week, he could be found engaged in some musical pursuit.

The middle of three boys, Hagerty began taking guitar lessons just like his older brother Jim, who has played with local math-rock whizzes Yowie. "He was interested early on," says Brian Hagerty. "His older brother took lessons and everything, and I remember us taking him to lessons at Music Folk in Webster. A lot of it, he progressed on his own. Musically he [drew from] so many sources. He could play any instrument.

"He got interested in music and never wavered. He liked to experiment and expand, like you know from his songs. He likes humor, and his songs are usually pretty 'up,'"

His band mates saw a similar drive kick in a few years ago, after Hagerty returned to St. Louis from a four year stint in Texas. "He kinda followed his dream a couple years ago," Joern says. "He worked for 1-800-GOT-JUNK for a long time and just got sick of that whole thing, and all he wanted to do was play music. So he started teaching lessons and until he passed, that's what he did for a living. He had something like 30 students and taught guitar and did trivia and hosted open mics. That's what he loved to do."

Hagerty and Joern began playing music together when the two were students at Webster Groves High School. The pair formed Fattback in 2005 along with Sean Dallmeyer, Mike Apperson and Grady Breidanbach. The band put out two full-lengths and released its last CD, the five-song EEE PEE, on July 24. Fattback excelled at blurring the lines between rock, country, folk and jam-band music, and the band's songs featured nonsensical, off-the-wall lyrics that nonetheless became audience sing-alongs at Fattback's raucous, participatory live shows.

"As far as songwriting, I would say that 75 percent or more was Dave's, lyrically," Joern says. "He was the main driving force of Fattback, really, just because him being who he is, it made it so easy and perfect. We just took anything that came out of his brain, put it on the paper and turned it into music."

According to his parents, Hagerty remained humble and vague about his contributions to the band - and always highlighted the contributions of the other band members instead of himself. "I would always ask David, 'Did you write this song? Who wrote this song?' - like a typical Mom," recalls Diane Hagerty. "He always called me 'Mama,' and he would say 'Mama, I'm not gonna tell you who wrote what 'cause then you're gonna be prejudiced and like that song better.' So I don't know which songs he wrote."