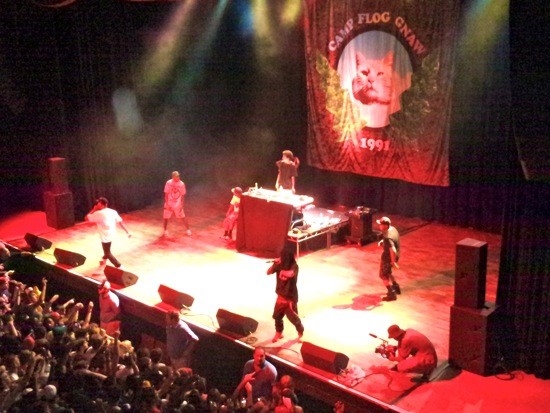 I never get headaches, but holy shit. I think my brain is rebelling against my body. I just left the Pageant, where I've had a pack of loud, rambunctious teenagers screaming at me for the last hour and a half, and my wise decision to lose my wallet somewhere before the show left me standing with an "under 21" stamp on my hand, without access to the life saving distraction of alcohol.

It should be said that, oh, I don't know, 95 percent of the attendees were clearly actually under 21, and for the most part white as the pure driven snow. I'd guess the median age at maybe seventeen -- the few older folks (such as myself) who did populate the place were offset by the (no shit) ten and eleven year olds. It seemed like at any minute, the principal was going to take the stage and make an announcement about next week's big homecoming game.

Fancy cell phones abounded, with kids snapping photos of themselves to upload to Facebook before the show even started. All of the tables and chairs had been removed from the venue, presumably because large groups of wild teenagers pretty categorically cannot be trusted with furniture.

The show started with Odd Future member Taco taking to the stage and stepping up to a laptop setup in the middle. That's how they're starting every show on this tour: Taco gets up there to "play songs to get the crowd fired up before the show," in the words of a previous review. Cue DMX's "Party Up," and the crowd, barely older than the song, went wild. In total Taco played about ten songs, including tracks by St. Louis' well known hip-hop artists (Chingy, Nelly, Murphy Lee, J-Kwon). Tyler, who has referenced the latter in song, was later heard to say "J-Kwon is from here? Aw, that is so tight. I did not know that."

It was during this DJ set run-up that two disturbingly thin teenaged girls climbed up on the countertop in front of me, which I had been using as a table, and began gyrating and air-humping (maybe somebody would call it dancing?) and singing along to a Lil Jon song. Ever the gentleman, I did my best to avert my gaze from the distracting, barely-post-jailbait duo, but I wound up getting sucked in, staring at the one on the right's distinct protruding spinal column. I referred to this girl in my notes, which were now far less decipherable thanks to the loss of my writing surface, as "stegosaurus" and noted that she needs to eat a fucking cheeseburger.