Of Montreal at the Luminary Center for the Arts, 7/4/11: Review, Photos, Setlist 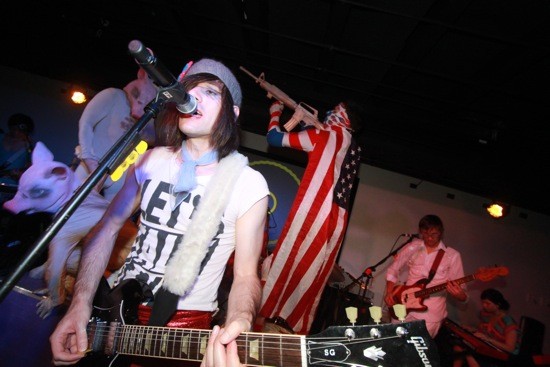 It seems as though Athens, Georgia's Of Montreal and Independence Day (the holiday, not the movie) shouldn't jive. July 4th is brimming with conservative values, and the band's transgender obsessed schizo-disco lives on the most westward tip of the left wing. But as a celebration of freedom and spectacle, an Of Montreal show makes Fair St. Louis's Montgomery Gentry and fireworks presentation look like an entertainment program for the Third Reich.

The great conflict in Of Montreal's show last evening was one of practicalities rather than politics. Those who witnessed the last few outings by Kevin Barnes and Co. at The Pageant tell tales of extravaganzas rivaling the Flaming Lips. At the Luminary Center, the difficulty lay in fitting one of indie rock's largest bands, literally and figuratively, into a 250-ish capacity venue with low ceilings. Of Montreal seemed to relish the opportunity to trade one classic American value - the "bigger is better" virtue - for another - the "pulling yourself up from your bootstraps" virtue.

Although Of Montreal has nothing to prove at this point in its career, the stripped-down set quelled the criticism that the band is more concerned with pageantry than substance. With a set leaning heavily on tracks from 2007's Hissing Fauna, Are You The Destroyer - the band's best record to date - Of Montreal played like the venue was ten times its capacity while making the crowd feel like the room was half the size. When Kevin Barnes sang "Oh, the party people dancing for the indie star", the sarcastic lyric on record became an observation of what was happening eighteen inches in front of his face. 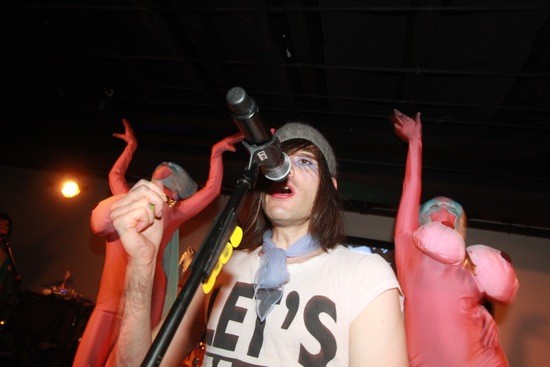 Of course, a "stripped-down" set by Of Montreal still includes three video projections, four onstage dancer/performers, masks, costume changes, confetti, and a guitar tech dressed like a referee (unplugged cable = technical foul). To compensate for the venue's size, the band stacked guitar cases into a makeshift riser for the Dadaist performance art that ensued during songs. Slow motion swordfight by knights in Spiderman masks for "Cato As A Pun." Tim Burton-esque skeleton-headed folk marauding like a bad LSD trip during "Heimdalsgate Like A Promethean Curse." The best choreographed and most timely move was a pig-masked pair kissing (making snout?) before an American-flagged man exercised his right to bear arms on them. A sequined Ms. America figure, an Aunt Samantha to Uncle Sam, emerged, resurrected the swine, and jumped into the man's arms as the band transitioned from "Labrynthian Pomp" to "She's A Rejector."

For variety (and to facilitate unnecessary but endearing outfit modifications for Barnes), different team players in the eight piece group led brief interludes. Kishi Bashi, who opened the evening with a stunning set of tunes built around violin loops, took the mic for Lonely Island-caliber rap cut "Just The Tip." Later, drummer Clayton Rychlik lounged it up with "My Funny Valentine." Earlier in the night, Rychlik played bass for Yip Deceiver, an Of Montreal side project whose textbook dance jams are recommended for fans of MGMT, MGMT or even MGMT. Yip Deceiver did get restless legs moving (doors at 7 p.m., headliner at 9:45) and hinted at the multi-instrumental capabilities that members would use to execute Barnes' oft-complex bedroom recordings. The Freddy Mercury harmonies on "Gronlandic" were particularly spot on.

The band feigned farewell after the sunny "A Sentence of Sorts In Kongsvinger," but two dancers remained onstage as the audience shouted for an encore. They unzipped each other's furry body suits to reveal themselves as the red white and blue couple from the pig fiasco. The crowd reacted with a chant of "USA! USA!" Within five minutes, dogs in American flag sweaters danced in a psychedelic video montage while Kevin Barnes sang "We can do it soft core if you want, but you should know I take it both ways" and an endless balloon animal chain snaked around the venue. Our founding fathers would have been proud. 1.Oslo In The Summertime 2. Bunny Ain't No Kind Of Rider 3. Faberge Falls for Shuggie 4. Labrynthian Pomp 5. She's A Rejector 6. Interlude - Just The Tip (by Kishi Bashi) 7. Godly Intersex 8. Sex Karma 9. Heimdalsgate Like A Promethean Curse 10. Slave Translator 11. interlude - My Funny Valentine (by Clayton Rychlik) 12. Hydra Fancies 13. Cato As A Pun 14. Around The Way 15. Gronlandic Edit 16. A Sentence of Sorts In Kongsvinger

17. For Our Elegant Caste 18. Wraith Pinned to The Mist And Other Games 19. Suffer For Fashion