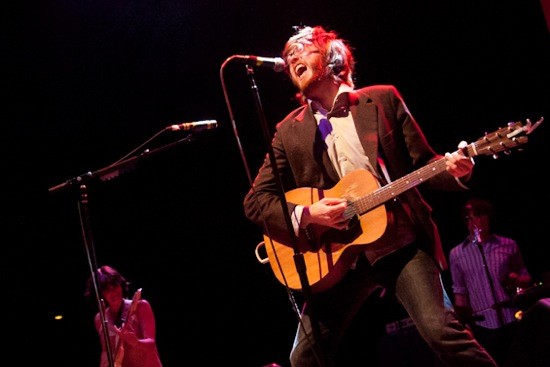 Will Sheff is making a mess. He's lost his glasses and his brown sports jacket and knocked over both of his mic stands and even very possibly yanked his guitar straight out of its amplifier -- it's a little hard to tell because he's got strictly unison parts with guitarist Lauren Gurgiolo. It's very late in the show, right before the encore. A chance for a finale from a band that knows how to hit them. Sheff started out the song -- "Unless It's Kicks" -- by lunatic screaming "LIGHTS UP! HANDS UP!" The crowd, healthy but by no means packed in, lifted its hands and started clapping. Sheff, meanwhile, is manhandling the thing, though that's very much the point, all pretense of notes and rhythms gone, and he is hollering the middle phrase of a middle line over and over: Climb out! Climb out! Climb out!...

The song ends and Sheff delivers a raving thank you. One of the few intelligible lines from it is, "It's pathetic how much I love you."

Okkervil River is often described as a literary rock band. That's not an unwarranted label, not when a random selection of lyrics gets you things like, "Lovers in their sheets, dreaming lovers sweetly turn in their sleep all under sunbeams." But this band does not put on poetry readings. It puts on rock shows, and even if you know the words going in, that's not what matters. A perennial Okkervil River live highlight is the end of "Lost Coastlines," which is just "laa, la la la la laaaa, la la la la laaaaaaaa, la la la la laaaaaa, laaaaaa..." If you are going to fall under the spell, it's not going to be the knowledge that this is a song about a metaphorical sailing journey to uncharted lands. It's going to be the way this band plays out on the edge of its means, the way all six members deliver rough-hewn conviction, the way Sheff loses his shit.

This isn't always a pretty thing. When the band has to stop midway through the set to deal with some problem with the keyboard, Sheff cheerfully asks his band mates if they've played a single show where something hasn't broken. He stops after a few notes of the very last song of the night, "Westfall," because something doesn't sound right on his guitar. "This is why the tickets were only $16," he says. "You want those bands that are in tune, you gotta pay a little extra."

Generally, these mishaps don't hamper the experience. But last night had its share of valleys to go with those peaks. The night got off to a halting start -- maybe the way the crowd was scattered through the venue was disheartening, and either way there seemed to be some issues with the on stage mix (as usual, the house PA sounded great). An acoustic break in the middle of the set served to get things back on track, though you could feel a restless rustle in the crowd. But there was plenty of ammo in the show's final act, where OR stacked its hits and the swell we came to experience was felt in clap-alongs and sing-alongs and a push to the front of the stage.

Opener Wye Oak, from Baltimore, is a somewhat odd pairing with Okkervil River. Where Will Sheff is so passionate as to occasionally seem like a cartoon come to life, Wye Oak's Jenn Wasner may not have even lifted her eyelids more than halfway the entire set. Not that it much mattered -- she and drummer/keyboardist/loop operator/octopus Andy Stack are making some of the most entrancing music around. Especially at maximum volume (check) on a system that can deliver all the threads tying these songs together (obviously check). This year's Civilian showed that, three albums in, the duo is still improving, still finding ways to use the incredible talent at its disposal to create music that is noisy and delicate, often in the same song.

Wasner's answer to Sheff's "It's pathetic how much I love you" was a deadpan "thank you so much," a polite smile and a wave.

Notes, setlist and more photos on the next page.