"Once People Start Giving You Free Shit You Have to Start Doing Things For Them." Steel Panther on Promotion and Ball Exposure 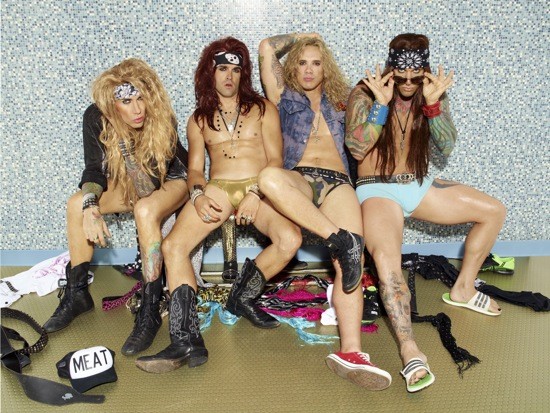 Let this be a week for hairspray, black pleather, and boobs. The Sunset Strip hair metal hooligans of Steel Panther will let loose on St. Louis with a sweaty, balls out show at the Pageant on Wednesday.

It's almost too easy to dismiss Steel Panther as a one-joke band that never realized Spinal Tap had been there and done that. Except that this seasoned quartet is actually insanely talented and can rock a power ballad so hard, even the prudest skeptic will whip out her lighter.

The jokes may not be subtle on the band's sophomore album Balls Out, but it's a well-produced tribute to the extravagance of the dirty '80s. Plus, you've gotta admire frontman Michael Starr's commitment to the shtick: Below, he talks to us about hoping to be the first band to play from the moon and having sex with so many women on the road that their names and parts all blend together.

Leah Greenbaum: When you guys were touring last year you said Balls Out refers to a way of life and also a thing that happens sometimes backstage. Has the meaning of that changed for you since the album came out nine months ago?

Michael Starr: Yeah, ya know it's funny to hear you say that because I got a new pair of spandex recently and I was rockin' and I went to do the splits and my spandex split wide open and my balls just popped out out cuz, ya know, I don't wear underwear. So that definitely gives a new meaning to "balls out".

It was actually a little embarrassing 'cuz you know when you're excersing, doing the cardio thing, all the blood rushes to your heart, so stuff down there isn't as big as it would be normally. So that was definitely a balls out experience for me.

Wow, was that on stage?

Oh yup, it went up on the monitor. My pants ripped and you know the rest.

It wasn't so cool for the guy standing in the front row. He was a little freaked out, but ya know, guys shouldn't stand in the front row. Guys should always take one step back and put a girl in front of them. That's just common etiquette. Girls should be first. That way you can be behind them and that's always a fun time too.

A lot of your songs are about women and what you guys want to do with them. Do any of those songs resonate with you differently now that the country has spent a year debating women's roles and precisely 'What Girls are For'?

Not really. That's a pretty traditional song. My dad raised me and I learned early on that you have to treat them with respect...you know, women. The guys go out and make the money and the girls do the other stuff. A lot of the girls I hang out with, they have jobs because I don't have a job. So it's kinda of switched around a little bit. So I guess that has changed for me. 'Cuz for me it's like you know, the girl [his wife] will come home from dancing and I'll say 'hey I need some cash' and she'll be like 'well can you make me dinner or something?' And I'm like 'yes dear.' So things are pretty different in this country now, I guess.

Do you ever hear from feminists or Christians or anyone like that about your music?

After we put out 'Gold Digging Whore' we thought we'd hear from Kanye West or something at least... but no nothing. There's no protesting. People enjoy this... it's all the stuff people want to say but they can't say because it's just not politically correct, so we say it for them.

It's odd because you'd think that maybe people would be offended, but it's ramping up. I mean as you can tell, it's not getting smaller, it's getting bigger. I think that's what happens when people get aroused you know.