Out Every Night: The Best Concerts in St. Louis From May 19 to 25

This week, check out the Body at Apop Records, Caitlin Rose at Blueberry Hill, the Schwag's return at the Pageant, Master P in East St. Louis and much more. Get some detailed recommendations after the jump and stay tuned 'til Friday for even more picks for the weekend.

Soulard Blues Band Monday, May 19, 9 p.m. @ Broadway Oyster Bar - $6 By Roy Kasten From the 2014 RFT Music Awards: One day, dear reader, the Soulard Blues Band will be no more. It's just a fact. And one day you'll wonder why, despite all the opportunities every other day of the week, you never saw this St. Louis institution in its prime -- and no, the band's prime ain't over. If somehow you've never danced your ass off when Art Dwyer lays down a bass line as smooth as crushed velvet, or when Marty Abdullah swings his phrasing on "Kansas City Blues" or "Dust My Broom," or when Tom Maloney plays a solo that would make his mentor (the late, great Benny Smith) smile, well you really should. Don't take this band for granted. Pay your respects soon; they've been earned.

New Music Circle Presents: Ingrid Laubrock and Tom Rainey Tuesday, May 20, 7 p.m. w/ Tyler Damon, Chris Trull, Kevin Harris Trio; Nathan Cook @ William A Kerr Foundation - $10-$20 By Joseph Hess From "The Best St. Louis Noise/Experimental Shows: May 2014": The Laubrock/Rainey Duo performs a spastic merger of horn and percussion, weaving in and out of jazz realms with relative space. Rainey is a powerhouse behind the kit, providing subtle touches between fierce, busy patterns. Laubrock matches his range with full-bodied tone, often stabbing with sharp notes from underneath a blanketed sound. Indiana native and percussionist Tyler Damon joins local players Chris Trull (of Yowie) and Kevin Harris for a sprawling trio of strings, skins and modular synth. NNN Cook is set to open with an electro-acoustic presentation featuring use of playback sounds.

The Body Wednesday, May 21, 9 p.m. w/ Fister, Dear Satan @ Apop Records - $7 By Joseph Hess Lee Buford and Chip King keep their hands out of the cookie jar. Their duo, the Body, is metal through and through, but manages to side-step cliches with relative ease. Desperate shrieks peak through the wall of blown-out speakers, bringing brief respite from the guitar's relentless hum. These screams cut like percussion, sitting proper with the drummer's heavy-handed pounding. Songs vary in tone, hitting both frantic speeds and slow, meditative drone. The Body's crippling volume is powerful enough to cause cracks in the foundation of whatever venue it plays, so bring ear protection, just to be safe. Finally, the link between noise music and metal is made. The opening acts, Dear Satan and Fister, represent two sides of a burnt coin dipped in dark laquer. The Body is perhaps the best blend of both genres, so this show should leave you feeling calm and complete, for once. 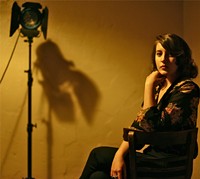 Caitlin Rose Thursday, May 22, 8:30 p.m. w/ Los Colognes, Emily Wallace @ Blueberry Hill - $12/$15 By Roy Kasten Say what you will about the mainstream country music factory, but were it not for the limp-fisted kingdom currently ruled by the likes of Luke Bryan and Brantley Gilbert, there would be no insurgents stirring up the sawdust outside the gates of Nashville. Case in point: Caitlin Rose, one of the most gifted singers and songwriters to make a home in Music City and to never make a dent in the country charts. With a voice that recalls the gliding soprano of Linda Ronstadt and a country-rock band that plays for keeps, Rose proves that what doesn't give you airplay only makes you stronger.