Out Every Night: The Best Shows From October 29 to November 4 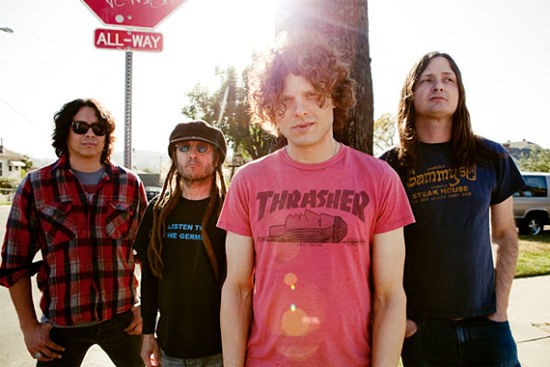 Well I'm feeling pretty good about myself today. Over the weekend I managed to get myself kicked out of the Justin Bieber concert at Scottrade Center while working on a review, proving that even in my old age I still got it. In my youth I was actually quite capable of being kicked out of any and all manner of establishment, likely owing to how punk fuckin' rock I was with my unorthodox appearance (I looked like a lunatic) and unruly behavior (I acted like an idiot). It's just good to know at least some of my youthful talents have followed me into adulthood.

Speaking of "punk fuckin' rock," there's some excellent shows of that particular variety coming to town this week. LA's punk super-group Off!, fronted by the legendary Keith Morris (Black Flag, Circle Jerks) will be at Fubar on Thursday alongside the similarly awesome Spits. Dropkick Murphy's is doing a special Halloween show on Wednesday at the Pageant; a booze-soaked good time is sure to be had by all in attendance. Below you will see we picked hardcore / punk / metal band Enabler at Fubar as our Sunday pick. Enabler is excellent, and I stand by that pick, but you should also be aware that Propagandhi is playing that night at the Firebird, and that show is also going to be awesome. There are shows this week that appeal to folks of the non-punk variety as well; the rest of our picks are below. I recommend that you see if you can get yourself kicked out of some of 'em! Live a little!

A.C. Newman Mon., 8:00 p.m. October 29 @ Blueberry Hill - $15 By Christian Schaeffer In the press release and accompanying interviews for A.C. Newman's new LP Shut Down the Streets, much has been made of the more personal turn his songwriting has taken. Certainly addressing the sunrise/sunset moments of the birth of his son and the death of his mother makes his normally elliptical, pop-driven songwriting with the New Pornographers hit with a more personal punch. He's been moving in that direction at least since the N.P.'s Challengers from 2007, but the reflective tone and more orchestrated arrangements give listeners an insight into a masterful songwriter who has long skirted telling a straight story. Punctuality Pays: Be on time for opener the Mynabirds, who played a great but under-attended show this summer at the Firebird in support of this year's politically potent Generals.

Gov't Mule Tues., 7:30 p.m. October 30 @ The Pageant - $25-$30 By Roy Kasten Gov't Mule was the first jam band, and maybe it should have been the last one. What started out as an Allman Brothers spinoff has become a potent and durable boogie-rock institution -- one undergirded by Warren Haynes' instantly identifiable sustained guitar and dirty-white-boy-with-the-blues vocal exertions. As a songwriter, Haynes has rarely shown the classic touch of his friends in the Dead or the Allmans or of his blues and Southern rock idols. However, backed by original (and vastly underrated) drummer Matt Abts, demonic organ player Danny Louis and relative newcomer Jorgen Carlsson on bass, Gov't Mule defines what's best about the jam style: It's instrumentally adventurous but never proggy and compulsively groovy but never mindless. After fifteen years together, the Mule is still heavy and still soaked to the bone in blues.

Dropkick Murphys Wed., 8:00 p.m. October 31 @ The Pageant - $25-$30 By Allison Babka Swagger. Music writers use this term to describe a variety of bands, but the Dropkick Murphys is one of the few groups that truly deserves it. Vocalist Al Barr and bassist Ken Casey exude so much testosterone when performing their trademark Celtic punk that you can smell the Guinness and Old Spice freely flowing from their pores. This is a man's band, dammit, and if you're going to keep up at the high-impact show, you'd better leave your dainty shoes at home. Let's just try to forget that the band is full of Red Sox fans, OK? Branded: To promote its upcoming album Signed and Sealed in Blood, the Dropkick Murphys encouraged fans to send in Murphys tattoos. The band plans to use the photos in the packaging for the album, due out next year.

Off! Thurs., 7:00 p.m. November 1 w/ The Spits, Double Negative @ Fubar - $18-$20 By Daniel Hill Fronted by punk legend Keith Morris, whose name you may remember from this one band called Black Flag and this other one called the Circle Jerks, Off! is automatically a venerable super-group from the outset, with members of Rocket From the Crypt, Burning Bride and Red Kross rounding out the lineup. But really, none of that matters unless the music is good -- and holy hell, it sure is. Lo-fi recordings, bombastic minute-long songs with enough hook to them to entrench the melodies firmly in your brain, and Morris' trademark howl make each Off! record an instant classic. The cover art of all the albums, created by none other than Mr. Raymond Pettibon, is the icing on the cake. Show Up On Time: The Spits and Double Negative are opening the show. Both are hugely respected and excellent bands in their own right, and the fact that this is a mere three-band show means there won't be time for things to drag.

The Fresh and Onlys Fri., 8:30 p.m. November 2 @ The Firebird - $10 / $12 By Kiernan Maletsky If there's anyone left yearning for yet another messy California garage rock album - even one from Northern climes - they need not turn to the Fresh and Onlys' latest, Long Slow Dance, an album as artful in its pop as it is bitter in its rock & roll sweetness. Songwriter and singer Timothy Cohen seems jangle-bent on picking up where R.E.M. left off circa 1986, channeling his psychedelic tendencies into precisely appointed melody after melody, gleaming hook after hook. The new, lush and strummy sound of the Fresh and Onlys is a long, slow-burning fuse from its slash and scorch start, but it's still a rock & roll band and it has rarely burned so brightly or smartly. Local Motion: This fall, Troubadour Dali has been on an aggressive tour of West. Get to this show early and welcome the band back home.

Aquitaine Fri., 9:00 p.m. November 2 w/ Bikini Karate, Middle Class Fashion @ The Heavy Anchor - $5 By Christian Schaeffer You may not know the name Aquitaine unless you're a Francophile, a visitor to the Pyrenees or a Middle Ages buff, so a quick brush-up is in order: The band formed last year as Supermoon, changed its name to the nonsensical/Adam Levine-baiting Super Maroon, thought better of that name change and recently settled on Aquitaine. The quartet comes from good guitar-rock stock: Dave Collett has played with the Love Experts, guitarist Gerald Good and drummer Chris Luckett play in bulletPOP!, and singer/bassist Will Hildebrandt spent time in a band called Simmons in the middle of the last decade. A love of British rock & roll, from the Who to the Clash to Ride to Supergrass, unites this band, and both Collett and Good make the case for loud but nuanced fretwork at a time when many of the band's local contemporaries have turned the volume down. American Pulverizer, Part 1 is the band's debut EP (Part 2 is supposed to be out by the year's end), and it's a promising greeting from a band with a strong pedigree and mostly solid footing.

Deadstring Brothers Sat., 8:00 p.m. November 3 @ Crack Fox - $7 By Roy Kasten Composed of four Detroit amigos and one amiga (harmony singer Marsha Marjieh, who is too good not to sing some lead), the Deadstring Brothers revive the comatose, quasi-country bar-band formula. They're probably sick of the Band and Stones circa Exile on Main Street comparisons, but the associations are inevitable given singer and songwriter Kurt Marschke's drawling, full-throated snarl (not to mention the jubilant rave-ups, an obsession with sinners and shadows, and slide guitar slipping into a thick Hammond-organ stereo mix). They're funky but not jammy, loud but not noisy, smart but not effete -- hence they're anathema to indie fashion, which is all the more reason to catch their St. Louis debut.

Via Dove Sat., 8:30 p.m. November 3 @ The Firebird - $8 By Annie Zaleski From this 2010 show review: Via Dove's debut full-length, El Mundo Latino, is in line with the hurricane-rock atmosphere of its live shows. Jagged guitar riffs, gigantic drums, deep-grooved rhythms and vocalist Andy Shadburne's twang-burnished growls dominate these eleven songs. Familiar touchstones abound: the Black Keys' lo-fi blues ("Need Someone"), Everclear's grunge-pop ("I Don't Mind"), Kings of Leon's dirty Southern boogie ("(I Can't) Recognize the Signs") and Pearl Jam's arena-caliber, classic-rock nuance ("Treasure"). Highlights include the slithering, bass-driven "All We've Got" -- which features some dirty, sleazy saxophone from Manoj Mohan -- and the blink-and-you'll-miss-it snarl, "Fast Times." Shadburne is a clear but powerful singer, and his dynamic range easily handles these variations on a rock & roll theme.

Enabler Sun., 7:00 p.m. November 4 w/ Tropical Storm! @ Fubar - $8 / $10 By Ryan Wasoba Milwaukee outfit Enabler occupies a familiar space on the metallic fringe of hardcore, combining Kill Em All riffs with Black Flag chants. What separates Enabler from the metalcore pack is its ability to push its physical and creative boundaries, deal with personal and political themes, and make it all sound like a party. This might explain the wide variety of credibility in the band's resume. On one end of the spectrum, Enabler's All Hail The Void was just released on the ultra-hip metal label Southern Lord. On the other, the band's original drummer Andy Hurley was in a moderately successful band called Fall Out Boy. Crucial Breakdown: Be prepared for the less-than-subtle Jesus bashing gang vocal of. "No one is coming back from the dead" on "False Profit."