Out Every Night: The Best Shows in St. Louis from April 29 to May 5 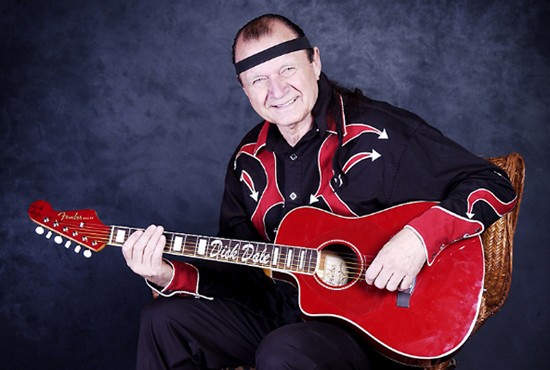 Serenity now, serenity now!! What better way to start the week than with a series of nearby ground-shaking, Earth shattering construction noises to accompany a morning cup of joe? Luckily, headphones exist and a series of bookmarked live performances take me back to my quiet place. Music soothes all, and it's a busy, busy week. Find your inner calm by maxing out on live tunes including exciting visits from touring acts such as Dick Dale and Danny Brown. Then, get ready to party with Apop Records' 9th Birthday soiree and Cinco de Mayo on Cherokee Street. Look for all that and more after the jump.

Note: Though we wish we could, we can't feature every great show happening in town in just one measly post. Look for plenty more recommendations this Friday in our weekend show post, and peruse the St. Louis concert calendar for more ideas anytime.

Did we leave something significant out? There's a chance it didn't make it onto our radar! Send your show tips anytime to [email protected].

Danny Brown Monday, Apr. 29, 8 p.m. w/ Kitty @ Old Rock House - $15-$20 By Cassie Kohler Danny Brown is definitely one of the most unique rappers today. The "Adderall Admiral" captivates with original similes and metaphors, all with a sprinkling of humor. His individuality stems to his abused drug of choice as well; Brown has admitted to using the ADHD medication in order to write songs. He is considerably older for a recent break-out in the rap game (Brown is 30), but that only makes the lessons of drug dealing, crime and addiction more believable. Heed the lessons Brown speaks.

G Eazy Tuesday, Apr. 30, 8 p.m. @ Old Rock House - $15-$20 By Evan C. Jones From "G-Eazy Talks About Headlining His First Tour and Success As an Independent Artist:" For most musicians, it can take a village to create everything that goes into a strong career, but most musicians aren't rapper G-Eazy. Early into his career, the young Bay Area native has criss-crossed the country on tour multiple times, shared the stage with such industry heavyweights as Drake and hit number three on the iTunes Hip-Hop Chart with his new release Must Be Nice...all as an independent artist. And he has no plans on slowing down now.

Deftones Wednesday, May 1, 8 p.m. @ The Pageant - $36 By Ryan Wasoba The biggest news in the Deftones camp has little to do with any new album or current members. The band's original bassist, Chi Cheng, passed away on April 13, five years after a car accident left him in a coma. Such news would cast a shadow over most bands' shows, but Deftones' music has always uplifted listeners by reveling in, rather than ignoring, the darkness of life. The turnout for the band's last performance at the Pageant proved fans' loyalty after years of inactivity. In the wake of Cheng's death, this show is likely to feel equally sorrowful and celebratory--two traits that, when combined, aptly define Deftones.

Dick Dale Thursday, May 2, 9 p.m. @ Blueberry Hill - $25-$27.50 By Jordan Harper Let's start with the obvious: the first five or so seconds of "Miserlou." In those five seconds of pure guitar, you can hear everything you need to know about why Dick Dale is a legend. The staccato picking, the slightly spacey feel, the clean surf sound: Every single element of those five seconds has been identified and plundered by another legend in the guitar world. Dale was heavy before heavy was cool, he was surf before surfing was cool, he kicked ass on his axe before shredding was cool. Dale is beyond cool -- he's proto-cool.