Out Every Night: The Best Shows in St. Louis From January 27 to February 2

This week, Darin Gray makes a special in-store appearance at Apop Records, the Hold Steady revisits Off Broadway, Greg Brown plays the Sheldon Concert Hall and the Firebird celebrates its fifth birthday. Check out these show previews and more after the jump, and stay tuned for more picks for the weekend on Friday. 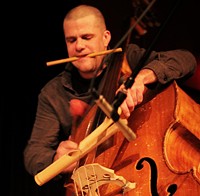 Darin Gray, William Tyler, Joe Westerlund Trio Monday, January 27, 7 p.m. w/ DJ Ghost Ice @ Apop Records - free By RFT Staff From this 2012 write-up: Between his family life in Edwardsville, Illinois, and his tours of Japan alongside folks like Jim O'Rourke and Wilco drummer Glenn Kotche, local performances by Darin Gray are rare. At a New Music Circle-curated show at the Kranzberg Arts Center with Chris Corsano and Dave Stone, Gray summoned the pent-up energy of the four-plus years since his last St. Louis performance and took it out on his upright bass. Strings were beaten with sticks, and an amplifier internally combusted. At the climax, he blew into a trumpet mouthpiece attached to a tube which he swung above his head as his bass lay lifeless onstage. It was enlightenment through aggression, cementing Darin Gray's reputation as our most creatively and physically dangerous musician.

DJ Mahf Tuesday, January 28, 10 p.m. @ Pin-Up Bowl By Blair Stiles From the 2013 RFT Music awards: DJ Mahf works from some place in his brain that pumps out enough enthusiasm to make his work look easy. Performing with a chilled zeal, the Indyground DJ interplays dense minutes of thumping samples with crackling movie clips and fine-tuned, one-and-two-handed scratches. He has already banged around Kansas City's spirited Middle of the Map Festival with labelmate Brett Gretzky, crossed the northern American border and cut and pasted for Red Bull's Thre3style competition this year. Whether live or replayed through Indyground's streaming footage, Mahf exudes the enjoyment he feels: In tempo he bobs at the waist, moving faster in the moments when he is inundated with the floor's energy, always looking pleased. It is Mahf's obvious enjoyment of his craft that puts his sets so squarely in the spotlight.

The Vanilla Beans Wednesday, January 29, 9 p.m. w/ Southern Lights, Stealing Silver, Riley Adkisson @ Foam Coffee & Beer - $5 By Alison Babka From this 2013 write-up: Ahhhh, the crème brulée at the end of our meal of bands. Despite having a name that conjures up the blandest ice cream flavor out there, the Vanilla Beans are rooted in shockingly vibrant tastes. Pop, electronica and dance all go into the pot, enhanced by some grungy vocals. If Motion City Soundtrack and local dance-pop group Née had a baby, it would be the Vanilla Beans. And that's one baby we'd gladly eat!

The Hold Steady Thursday, January 30, 9 p.m. w/ Tim Barry @ Off Broadway - $20-$23 By Kiernan Maletsky From this 2011 show review: The Hold Steady started out as a band of dudes who were too old for this scene shit. So they told some stories and stretched some truths and painted in wailing guitar solos and satisfying beat kōans about the blaze of youth. These have always been delivered with an empathy that borders on embodiment. For the duration of a Hold Steady show, everyone in the building (or the field, in this case) is a prom queen on a bender, a burnout on the road, a Christian trying out some new things. We all sing woah-ohh choruses, and giddy front man Craig Finn's demeanor blows straight backward past youth to infantile. He crashes around the stage, arms akimbo and outstretched like wings, grinning wide, excitedly hurling spit into the crowd on a few key lines. How he musters this much joy for songs he's sung endlessly for years seems almost suspicious, until you remember he's been summoning bygones since day one. There's no risk of him losing touch with his material because it was always documentation rather than diary entries.