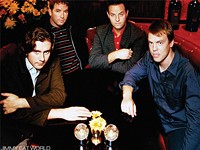 Dax Riggs Friday, August 2, 9:30 p.m. w/ The Lion of Hazelwood @ The Firebird - $12-$14 By Jenn Derose Dax Riggs has the voice of a demon, with a throat marinated in Old Crow and motor oil. His most recent album, 2010's Say Goodnight to the World, delivers spooky blues-rock draped in a thin gothic gauze. It is his most interesting effort since his earliest work with the seminal sludge-metal band Acid Bath. Riggs' take on the blues is original, with ephemeral, distorted guitar riffs that echo his metal past and vocals that oscillate from gnarly growls to syrupy coos. His voice lingers and beckons with doom-obsessed lyrics. The final product is not as depressing as it sounds -- the songs reflect a view of death so grim that it's almost silly: "I dug my way out of a grave/ and rode the worms into Judgment Day."

Middle Class Fashion CD Release Friday, August 2, 9 p.m. w/ Humdrum, Kid Scientist @ Off Broadway - free By Mike Appelstein From "Jungle Out There: Jenn Malzone Talks Middle Class Fashion's Outstanding New LP:" Jungle is one of the most impressive records St. Louis is likely to produce this year. It's a remarkably solid effort that takes risks and usually succeeds. Though Malzone has been compared to Ben Folds at times for her piano-driven singer-songwriter approach (one local wag affectionately dubbed the band "Jenn Folds Five"), there's a definite power-pop flavor on at least half these songs, picking up nicely from Girl Talk songs like "Fun Whoa" and "Sugar Hrt Candy." In particular, "Let Me Down" and "Stuck" are multilayered yet hooky enough to compare with anything on the New Pornographers' first three albums.

California Wives Saturday, August 3, 9 p.m. w/ Scarlet Tanager, The Reverbs @ Plush - $10/$12 By Roy Kasten Caught between stadium rock and electro-pop, California Wives sometimes seems like just another indie guitar-and-synth band with an identity crisis -- a terminal case of laidback-ness and a decent New Order collection. But perhaps that synthesis is the Chicago kids' identity after all. Last year's Art History drifted along on a rinse of staccato guitars, waterfalling keys and Jayson Kramer's falsetto vocals, all perfectly pleasant if indistinguishable from other new-wave habitués, only the band's hooks have as much momentum as the rhythms. If this is daydream music, it's a bliss you can definitely dance to.

Nelly Saturday, August 3, 7:30 p.m. w/ Karmin @ The Pageant - $35 By Tef Poe From "Lessons I Learned From Nelly:" Nelly's music has the ability to resonate with several different types of crowds. The hood and the hillbillies combined show love to the him. He has songs with Gucci Mane, Tim McGraw, and Rick Ross. It's difficult to apply a lane to this type of versatility. Rocking a capacity crowd of thousands of people on the outside stage downtown in your hometown is a major look for a hip-hop artist.

Bottoms Up Blues Gang Sunday, August 4, 8 p.m. w/ Paper Bird, Clusterpluck @ The Gramophone - $6 By Ryan Wasoba You don't have to sew a patch onto your leather jacket or undergo rigorous hazing to join the Bottoms Up Blues Gang. Simply live in St. Louis, play an instrument, and speak pre-war blues like a second language; you will be riding alongside ganglords Kari Liston and Jeremy Segel-Moss in no time. The band's open-door policy and revolving-door membership works because a plethora of like-minded local musicians (including expert harmonica-slinger Adam Andrews) are beyond comfortable riffing on the duo's songbook. The Gang's tunes could pass as age-worn classics, especially when coming from the pipes of Kari Liston, a charismatic frontwoman with the voice of an angel, expelled from heaven for debauchery.

Note: Though we wish we could, we can't feature every great show happening in town in just one measly post. Look for plenty more recommendations this Friday in our weekend shows post, and peruse the St. Louis concert calendar for more ideas any time. Let everyone know what else you're looking forward to seeing this week in the comments below, and send show tips any time to [email protected] to be considered for inclusion on these lists.