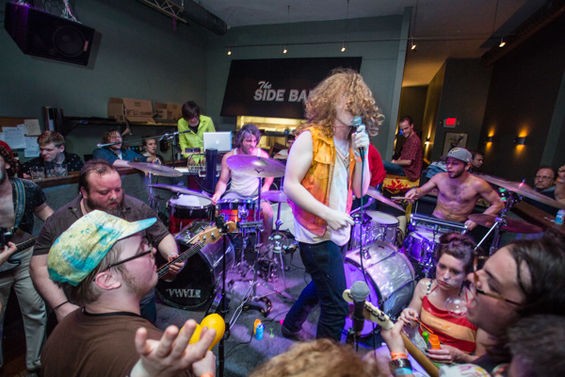 Noisefest X Friday, November 1 through Sunday, November 3 w/ Dear Satan, Nightgrinder, Within, Tony Renner, Noiseman433, Charlie, Sigulda, John Beabout, Eric Hall + many more @ Lemp Arts Center - $7-$20 By Joseph Hess From "Announcing Noisefest X With More Than 20 Experimental Acts": One decade ago, Lemp Neighborhood Arts Center first hosted a bevy of performance artists, serving up subversive sounds in an accessible, encompassing environment. The tiny art house on the corner of Lemp and Utah avenues brought in bands and solo acts from throughout the country, and arguably made St. Louis relevant in the ever-growing realm of noise music. The effects of the first Noisefest were certainly long lasting, as St. Louis quickly became a destination for traveling bands of experimental ilk. On Friday, November 1, LNAC will kick off Noisefest X, a three-day, four-show festival with more than twenty performers from around the country.

P.O.E. Fest Friday, November 1, 10 p.m. w/ Tef Poe, Rockwell Knuckles, Black Spade, Steddy P @ The Gramophone - $10 By Daniel Hill From "Premiere: Tef Poe and Rockwell Knuckles' New Single 'Night Light'": The first single has just dropped from Tef Poe and Rockwell Knuckles' long-awaited and much-anticipated David Ruffin Theory collaboration, due for release next week. The song features ethereal, synthy production courtesy of St. Louis' Trifeckta that makes me think of spaceships, for some reason. The chorus is handled by the talented Aloha Mi'sho, and the final product pushes sonic boundaries while staying firmly grounded in hip-hop. If the rest of the upcoming record is on par with this track, we are all in for something special when it drops next week.

The Body Saturday, November 2, 8 p.m. w/ What We Won't See, Execution Techniques @ Apop Records - $5 By Rick Giordano Sharing a name with the Stephen King story that inspired the film Stand By Me is perfectly fitting for a group like the Body. The band is the audio equivalent of that moment when things turn sour, the loss of innocence, the instant when you are so terribly creeped out that your nuts feel like they're in your throat. That ugliness, amplified as loud as possible in a dark basement and accompanied by a bunch of guys who don't smell too great perfectly describes the intense horror of the Body's live shows. The Providence, Rhode Island duo just released its fourth LP of noise-doom earlier this month and will once again be stopping by Apop Records to make things fall off the walls upstairs. To be clear: Yes these are all good things.

Bug Chaser Album Release Saturday, November 2, 9 p.m. @ Off Broadway - $7-$10 By Jaime Lees Every Bug Chaser show is a psychedelic future-rock freak out. At last count, the band contains eight band members, all adding a key element to this deliciously unholy monstrosity. Bug Chaser sounds like music to accompany a free-for-all LSD-enhanced orgy -- part freedom, part sex, part terror. In the past couple of years it has earned a reputation as a band that brings a serious entertainment factor into its live show, frequently presenting its music as a sixteen-armed writhing creature having a PTSD flashback under swirling lights. It's authentically weird, and in the best way. This show marks the release of the bands new LP, recorded and mixed by the south side's favorite engineer, Jason Hutto. Headliners and frequent visitors via Nashville, Pujol, and local sensation Black Panties round out the bill.

Deer Tick Sunday, November 3, 8:30 p.m. w/ Robert Ellis @ The Firebird - $18-$22 By Roy Kasten They like to go by their first, middle and last names, like they're serial killers or Texas singer-songwriters, and they like their beer with chasers of backwash, because by the end of another wrecked rock & roll night they're just going to spit it all over the stage anyway. That's what you do when you're in Deer Tick, the careening, never-passed-inspection-so-don't-ask vehicle for songwriter John Joseph McCauley and the greatest living Midwestern rock & roll band from Rhode Island. What Deer Tick has done on its new album Negativity, however, is make music it has promised but never quite delivered: earnest, resilient and in love with grand string-and-horn-spiked melodies and choruses.

Note: Though we wish we could, we can't feature every great show happening in town in just one measly post. Look for plenty more recommendations this Friday in our weekend shows post, and peruse the St. Louis concert calendar for more ideas any time. Let everyone know what else you're looking forward to seeing this week in the comments below, and send show tips any time to [email protected] to be considered for inclusion on these lists.