Out Every Night: The Best Shows in St. Louis this Week from January 28 to February 3 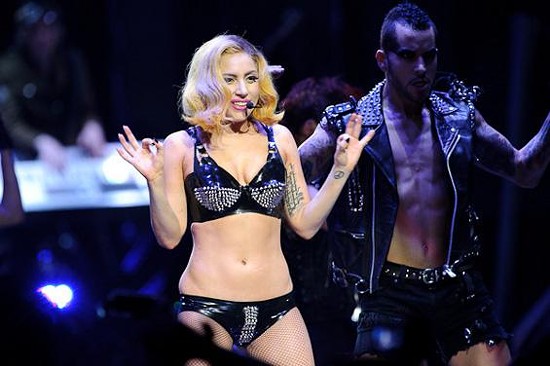 February's shaping up to be a pretty crazy month for music. And by crazy, I mean crazy. With the likes of Lady Gaga and Blowfly in only the first week, it'll be hard to compete with the level of shenanigans that are sure to ensue (also, what's this business about Bearhug?). Hell, we're not exactly sure where the rest of January went, but there's still time to squeeze in a show or three or more before it's over. This week, see Yo La Tengo, Kristeen Young, Ghost Ice and more. See what's after the jump in this week's show recommendations.

Soulard Blues Band Mon., 9 p.m., January 28 @ Broadway Oyster Bar - $5 By RFT Staff The Soulard Blues Band has gigged around town for more than twenty-five years. Most notably, its weekly residency at Broadway Oyster Bar perfectly accompanies the Southern-themed vibe complete with booze and Cajun food. Bassist and sole remaining founder Art Dwyer, a blues aficionado on local community radio station KDHX, holds down the band with his casual plucked lines. The rest of the rhythm section follows suit, allowing room for solos to float between rounds of drinks and a comfortable swing.

Ghost Ice Tues., 9 p.m., January 29 w/ Pak, Dungeon Broads, Marble, Blemished Stone @ Apop Records By RFT Staff Jeremy Kannapell is shy and mild mannered. The music he performs as Ghost Ice is anything but. He creates unsettling environments, often using little more than his own breathing noises as source material. Kannapell does not wrangle his aleatoric sounds into music as much as explore the unknown territories that result from their manipulation. His pursuit of "what if?" frequently finds him investigating other mediums and collaborating with other musicians, making him one of the great behind-the-scenes enablers of the St. Louis experimental arts. Kannapell's dynamic with Ghost Ice is not exactly a Clark Kent/Superman scenario, but there is a distinction. Jeremy Kannapell is a great guy. Ghost Ice is an experience.

Dave Holland Quintet Wed., 7:30 p.m. and 9:30 p.m., January 30 @ Jazz at the Bistro - $32-$37 By Ryan Wasoba From a 2009 show review: Jazz musicians dedicate their lives to this highly specialized form of thrill seeking: the instantaneous composition of a piece of music that has never been played before and will most likely never be played again. Few people understand the sanctity of these moments like bassist Dave Holland. In the 40 years since Holland appeared on Miles Davis' notorious Bitches Brew and In a Silent Way sessions, he has continually chosen the path less traveled for the sake of musical adventure. Collaborations with Anthony Braxton, Chick Corea, Bill Frisell and countless others have served to sharpen his approach of flirting with the avant garde while still connecting to the masses.

Yo La Tengo Thurs., 9 p.m., January 31 w/ Calexico @ The Pageant - $22.50/$25 By Ryan Wasoba Yo La Tengo's shows are consistently full of "You should have been there" moments. The band previously performed a live score to a nature documentary at Webster University and put on a variety show at the Gargoyle with Tortoise's Doug McComb on guitar and comedian Todd Barry on percussion. During the Hoboken trio's last "conventional" show at the Pageant, the band broke into a five minute noise explosion midway through a Beach Boys cover. Guessing what surprises lie in Yo La Tengo's bottomless bag of tricks this round is futile; this 28-year-old band is more spontaneous than most bands of 28-year-olds.

Kristeen Young Fri., 8:30 p.m., February 1 w/ Bruiser Queen, CaveofswordS @ Cicero's - $10 By Kiernan Maletsky From 2011: Time to check in on Kristeen Young, the St. Louis native with a keyboard, big hair and a much bigger vocal range. After nearly a decade of playing every venue like it was the Pageant, she actually got there when Morrissey tapped her to open for a 2007 tour. One fan, observed by a reviewer for the RFT, succinctly summed up the city's general response: "God, I wish she would shut the fuck up." But it is no longer 2007, and she returns on the heels of another tour.

Firebird 4 Year Anniverary Fri., 9 p.m., February 1 w/ Volcanoes, The Breaks, The Brainstems, Roundheels @ The Firebird - $5 By RFT Staff From a 2012 Best Of blurb about Volcanoes: Many college kids form bands to pass the extra time while studying to enter the real world, yet very few aim or expect to take their act past the dorm rooms and Solo-cup-littered basement shows. This is not the case for Jon Ryan and Eric Peters of noise-rock band Volcanoes. Ryan and Peters signed to Afternoon Records late last year, making them another St. Louis band branching beyond the local scene. Volcanoes started in a dorm room, where its first EP was written and recorded. That was also the venue for the band's first packed shows. The drum-and-bass duo is taking its act and recent full-length Heavy Hands beyond its Lindenwood stomping grounds, touring as far as New York. If noise rock is what the kids are craving these days, then Volcanoes knows how to bring it to them. While this may be the end of the dorm shows, Volcanoes' sets still terrorize listeners' ears every time it takes a stage of any size.

Lady Gaga Sat., 6 p.m., February 2 @ Scottrade Center - $49.50-$175 By Diana Benanti From a 2010 show review: Anyone who came to Scottrade Center last night as a Lady Gaga enthusiast left a disciple. Boys kissed boys, girls kissed girls, freak flags flew high and there wasn't a single person in the audience who wouldn't have jumped happily into bed with Gaga after the show. Her presence was electrical, magical and fantastical. The Westboro Baptist Church was outside protesting the smutty starlet, but inside the arena, not a single one of the near 15,000 people in attendance felt anything but love and adoration for the Lady. Creed be damned, everyone worshiped at the Gaga altar and loved every minute of it. Despite the protest, she took the stage on time, ate hearts - and after two hours and ten searing minutes, she burned the motherfucking house down.

Bloody Knives Sat., 8:30 p.m., February 2 w/ Bug Chaser, Tone Rodent @ Plush - $6 By Joseph Hess Bloody Knives wrecks with rock 'n roll layers. Resident sound manipulator Jim Moon often breaks into a standing seizure, looking like he could chew through any number of synthesizers or samplers around him. The Austin trio rips through sets with punk velocity, slowing down only for psychedelic murmurs. Bassist Preston Maddox anchors the music with loud crunch, adding melody to the band's otherwise-unhinged sound. This band is hard to label, as its singular spin on modern rock comes off as equal parts bizarre and lovable. The Knives produce a thick sound, but keep the songs on a short leash through solid, repeating riffs.

Mark Dew Sun., 8 p.m., February 3 @ Hideaway Restaurant & Lounge By RFT Staff To walk into the Hideaway is to enter a place that seems frozen in time, where the dozen or so seats around the piano are packed with your grandparents' friends, decked out in chunky jewelry and tilted fedora hats. Ostensibly, they're here to listen to Mark Dew play -- he's here Wednesday, Friday, Saturday and Sunday nights -- but you're just as likely to hear one of those old-timers sitting around the piano trill Charlie Rich's "The Most Beautiful Girl." And when Dew finally has his turn at the mic, he'll say something humble, like, "I apologize; it should have been in the key of F." No matter. Dew is the conductor of this time-traveling train, and everyone's on board. Dew, who is blind, has been the piano man here for nearly a quarter-century and jokes that the best part about working here is, well, getting paid. He marvels at the younger set trickling in and its knowledge of the Cash and Sinatra songbooks: "The more the crowd gets into it, the more I play," Dew says. And that's enough to keep him around. "I'm not quite ready to be out to pasture," he says. "Yet."