Paste Magazine Folded Today. What Will Happen to Its Tour? [Update!] 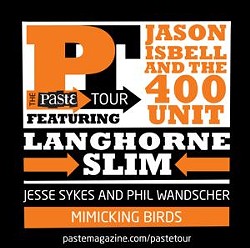 Gawker broke the news a bit ago that Paste's print magazine is folding. The publication has been in financial trouble in recent years: In 2009, it held a fundraiser which kept it solvent, at least temporarily. According to the Associated Press, Paste's website will stay active.

There's no word yet on what's going to become of the Paste Tour, which is slated to stop at Off Broadway on Friday, October 15. The lineup is solid and features popular draws (Jason Isbell & the 400 Unit, Langhorne Slim) and a few left-field faves (Jesse Sykes & Phil Wandscher, Mimicking Birds). I dropped a line to Steve Pohlman at Off Broadway to see if things are still a go.