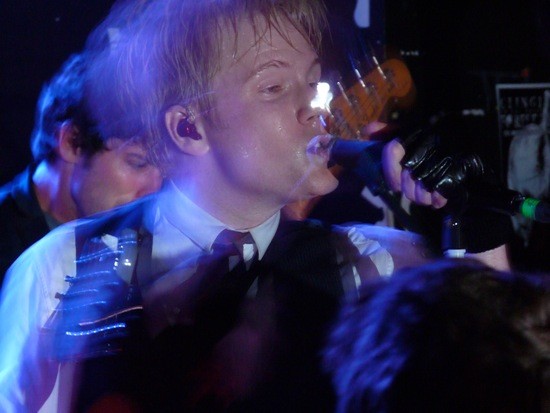 Credit Patrick Stump for his artistic integrity. Which is to say: He is currently creating the exact music he wants to, the stuff that comes from somewhere in the marrow of his bones. That much is clear.

But the Fall Out Boy vocalist has charted a truly bizarre course. It took him to St. Louis last night, packing a setlist full of splashy pop earworms -- the best of which all belong in arenas. Of course, he wasn't playing an arena. He also wasn't playing stripped-down versions of his visions at a piano in some lounge somewhere, which is one way this sort of music could get a more conventional start. No, he was playing Fubar, because you have to dance with the date that brought you. (Even if you started the dance as the soft-spoken skater nerd, excused yourself midway through the evening, and wandered back in as the prom king.)

The contradiction of last night's setting was never clearer than during a piano interlude, where the other four members of the touring band left the stage and Stump took a seat at a truly ridiculous eight-foot-long keyboard, a gleaming, white behemoth straight out of the Elton John Goes To Space collection. You wouldn't have batted an eye at the thing on a much bigger stage or even a much cleaner one. But Fubar -- and I mean absolutely no disrespect here -- is a good place to go if you want to punch somebody in a mosh pit and rip the mirrors off the wall in the bathroom (if someone hadn't already beat you to it years ago).

And there was Stump, sitting at his cartoon keyboard singing a medley of R&B covers and originals, wearing a vest and tie with his hair died blonde. The songs he played during that interlude actually translated the most directly: The punk-rock PA at Fubar is not designed to translate a five-piece band playing airtight pop arrangements.

All that said, Stump may sound a bit like Prince these days, but he still made a career by playing places exactly like this one for years. And he still moves like a pop-punker, flailing and energetic and good-natured about the rough edges in a way Prince definitely would not be. And Stump's pop music still owes a debt to his past life. It's tough to put a finger on except to say that many of the new songs move the way the best Fall Out Boy ones did: with bright momentum.

The crowd was also somewhat strange -- small but unbelievably devout. The venue was at maybe three-quarters capacity. It's tough to tell exactly because those who came crammed against the stage and those few hanging back a bit were overwhelmingly chaperones, parents who were probably thrilled when the encore ended at precisely 10 p.m. So it was a strange density of people, screaming their professions of love, singing along to songs you can only hear in YouTube clips of heretofore rare live performances and throwing X-marked hands in the air. There were some Fall Out Boy fans, for sure, and some more who definitely jumped on board with the new stuff. But not a ton of either.

Stump's solo catalog thus far consists of one EP, several ad hoc YouTube videos and a couple singles from a long-delayed full-length that will finally come out in October. Most of it has been cheesy in the best possible way. The chorus of current single "This City" goes: "This city/is my city/and I love it/yeah I love it/I was born and raised here/I've got it made here/and if I have my way I'm gonna stay..." It also includes a straight-up "Man In The Mirror"-style key change.

It's easy to see why this would be met with derisive snickers, and I'm sure that is exactly how some people will meet it. But it is hard to root against this man. He's earnest without being dumb, confident but self-aware. Then there's the fact that he can deliver a song like "My City" (or "Explode," which is actually the much better of the two singles anyway) with enough technical and vocal ability to take would-be eye-rollers and make them sing along.

He ended the set with the new singles, powering through some not-at-all surprising technical difficulties with a backing track on "Explode." Everyone in that place knew the finale by heart, though in fairness it only takes about two listens to either song to learn them. The crowd swooned and shouted along and took a million cell phone pictures. The set ended, and what seemed like the entire crowd either lined up for merch or waited on the sidewalk outside the tour bus parked in front. The bus was nearly as tall as Fubar. If you include the trailer attached to the back, it was several feet longer than the venue is wide.