Peach is Looking for a Lead Guitarist 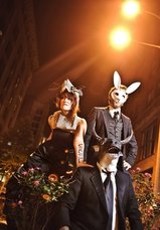 Peach is hiring. Currently a trio, the band is looking for a lead guitarist. And lest you think this is a minor role, our own Christian Schaeffer described the group as "guitar rock" in his recent review of the Far From the Tree EP. "Ideally, we're looking for someone with some pretty ripping guitar chops, who can write lead lines for the style of music we're playing, and outside of that -- commitment and attitude are, of course, critical," says front woman Melissa Roberts. "We're pretty a pretty easygoing group, all with vastly different musical tastes/backgrounds, so we're just looking for that 'natural fit.' It might be a romantic notion, but we kind of think when it works, we'll know it."

This isn't a matter of replacing somebody -- Roberts is mostly looking to free herself up to play guitar less so she can focus on singing and what she describes as "freedom of performance."I am a singer first, guitar player second -- though I'm warming up to it -- and I want to be able to showcase that a little more," she says. "We're not particularly interested in changing our sound or the fundamentals of the band... but there are some things we'd like to do -- particularly in the live setting -- that we just can't accomplish with three people."