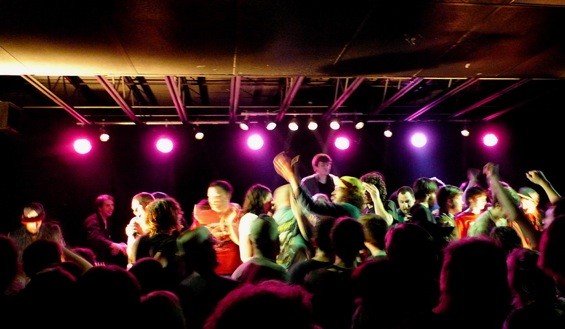 Video and a slideshow coming soon...
Other Random thoughts/notes/observations:
-Opening act The Box Elders from Omaha were outstanding. Four guitars of pure awesome on two people. Two guys played doublenecks (one a twelve string and a six string, the other a bass and a six string) but drummer Dave Goldberg stole the show by playing keyboards and percussion at the same time, holding a drumstick between his teeth to do it. He also waved his stick like a symphony conductor's baton and was just all-around impressive.

photo by Keegan Hamilton
Box Elders Drummer Dave Goldberg
-Huzzah for the Firebird for hosting a non-smoking show. A friend describes the experience when smoking is allowed as "inhaling a lump of coal." Staff also did a great job of keeping everybody safe despite the chaos and warning crowd surfers instead of throwing them out and creating a conflict.

-The Black Lips weren't shy (shocking, eh?) about interacting with the audience. Saint Pé -- sporting a Braves hat and gold grill on his lower teeth -- hung out at the bar during the opening acts and talked to fans about the Lips' plan to go on tour of Iraq and his idea of rock and roll: "The imperfections are perfections. We'll never play a song the same way twice."

-The guitarist also mentioned that he just bought a brand new Cadillac. When asked if he'd be bumping  "Two Dope Boyz and a Caddilac" by fellow Alanta natives Outkast he replied in the affirmative and added that he was also going to "throw some D's on it." It's nice to know that regardless of whether it's white or black, punk rock or hip-hop, the Dirty South stands united in their choice of automobiles and accessories.