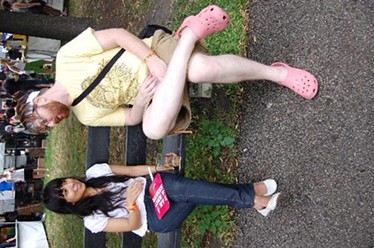 (This man is comfortable with his sexuality.) A friend sent along a link to all of the Craigslist missed connections from Pitchfork. (She found the link here.) Many are quite hilarious, ranging from Onion-esque to downright hipster stereotypes. A selection:

Best Imitation of a Decemberists song: "your friends called you caleb" "you were pretty close to the front for animal collective. you're tall, attractive, thin, have beautiful eyes, and you were fanning the crowd with your shirt. i like the left side of your collar bone."

Best Caricature of a Hipster, Part I: "owl belt buckle both days" "you had a big owl belt buckle and a godspeed! tattoo. during a hawk and a hacksaw, i heard you say, "it's raining and we're all going to look like sh-t, so let's just dance" i didn't dance, but you made me smile."

Trying Too Hard to be Above the Hipster Masses (But Yet Still Being One of Them): "pitchforked" "I was the 83rd guy that you flirted with today at pitchfork. We were both hammered and I didn't get your number or your name, or talk to you, but you looked at me, and I think that meant you wanted me. I was the grimy dude with torn, cut-off jean shorts. Remember? I was the only one wearing such a garment. Oh, and I had reflective truck driver sunglasses on...which were very unique for the festival and indicative of my enigmatic and distanced character. If you still don't remember, then it's probably because I merely followed you around from behind for awhile, and I don't think you ever actually noted my presence. If you want to get together for some vegan soy cutlets or to go shopping for some head-and-shoulders dandruff eliminating shampoo, just email me."

Took a Wrong Turn While Heading to a Fall Out Boy show: "pitchfork" "Ugh why is it so hard for us? I thought about kissing you a thousand times today and you made it seem like it would be so natural - until I went to do it and you seem to bail. unless it is in my head. :x kisses anyway xo"

Best Caricature of a Hipster, Part II: "Pitchfork -- Throwing up near the entrance - w4m - 21 (Union Park)" "You were throwing up during !!! in the blue trashcan near the park entrance while holding a Sparks. Your jackass friend was just sitting there smoking Parliaments. I'm sure this happened more than once, so you were the one wearing leopard skin zubas. I hope you didn't get any in your mustache. <3"