The sun wasn't out during Fleet Foxes' 3 p.m. set at Pitchfork Music Festival, but they still managed to warm my heart.

Though their self-titled album is probably my favorite release of the year thus far, I wanted to reserve final judgment until I'd seen a live performance. Today was complete vindication. 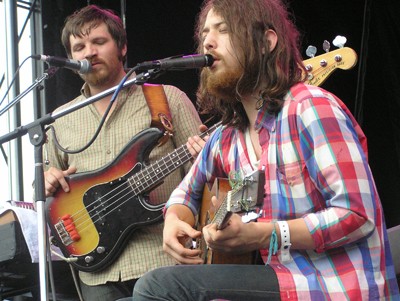 I've heard the Beach Boys sucked live. It was my Dad who told me that -- whenever he saw them back in the day, they could never quite nail the complex, multi-layered harmonies they produced in the studio. I was afraid that Fleet Foxes, who have drawn countless comparisons to the Pet Sounds and Surf's Up era Beach Boys, would fall victim to the same plight. Not so.

With vocalist Robin Pecknold holding down the lead duties and the drummer, mandolin player and bassist providing the backup vocals, they managed to beautifully recreate the richly textured vocals that make their unique brand of folk so strikingly beautiful. Only guitarist Skye Skjelset didn't sing. Instead, at, times, he played his electric guitar with a violin bow. 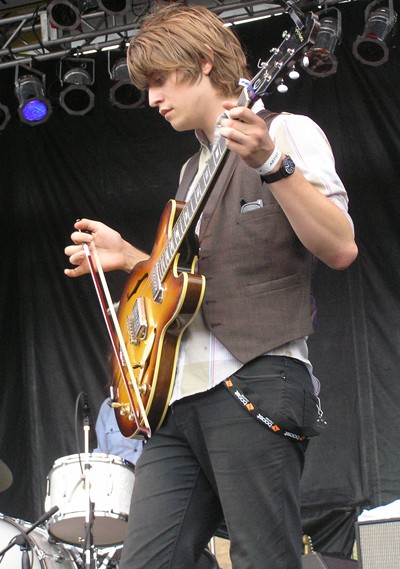 Other than those stunning four-part harmonies, what struck me most about their live songs was the percussion. The drummer (forgive me, I don't recall his name. Anyone? -- ed. note: J. Tillman) used everything from mallets to maracas to mix up the rhythm, and shakers and tambourines were perfectly placed by the rest of the band members. Even as the other band members left the stage to let Pecknold perfom "Oliver James" solo, Pecknold kept the beat at key parts by gently knocking the body of his guitar with his knuckles.That's the mark of a great live show, it revealed a layer of the music I hadn't fully understood or appreciated when heard recorded.

In an interesting aside, Fleet Foxes was the first band that I've heard address the power of Pitchfork (the Web site, not the festival.) Pecknold said at one point: "Thanks to Pitchfork for facilitating our very existence" and another band member chimed in, "Yeah, that's the elephant in the room, I guess."

Fleet Foxes, of course, received a 9.0 from the Forkers for their self-titled album and they've been riding the buzz ever since. I think Pecknold was being a bit too kind, however, as everyone from KEXP to Rolling Stone