Pokey LaFarge Tour Diary, Part One: Conquering the U.K., One Town at a Time

(Pokey LaFarge and the South City Three are currently touring the U.K. He passed along some thoughts, which you can read below. Part two coming later.) 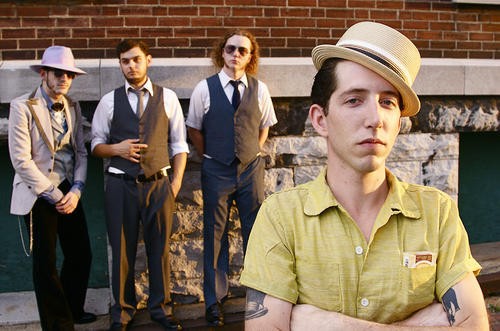 Thursday 8/5, Big Chill Festival Our first performance of the tour. Big crowd with lots of young people dancing, which was surprising because most people don't usually go off dancing to our music over here. A great way to start the tour.

Highlight: Played on a stage that was solar powered. Also, talks of us coming to this festival as well as Glastonbury Festival next year started immediately after our set as the promoter and booker of the festivals saw our performance.

Friday 8/6. Private Function We had a nice chill time playing for some friends and their wedding anniversary. Some good swing dancing by some folks ensued. 2 for 2 in the dancing category. Not bad!!!

Highlight: I learn the meaning of 'banter' as the English call it. We call it heckling.

Sunday 8/8, Brighton, England. Prince Albert Hall The sun shone brightly on brightly on the shores of Brighton, one of my favorite towns in the world. (Just go see for yourself the 'vacation palace of Queen Victoria and Prince Albert.) A bustling little sea port town with lots of eccentricities and color doubled by the fact that this weekend was actually gay pride weekend. Brighton already being 'the gay capital of Britain' had been partying for a week up until this weekend and you could tell. The marine parade was filled with drunken foot traffic that were carelessly pouring into the streets. Quite the spectacle to behold and good views all around. Pretty people with the backdrop of the English channel, (La-Menche the French call it). We parked and walked around on the boardwalk down to the marine harbor where there looked to be a mini circus intermingled with little shops kinda like that of Fisherman's Wharf in San Francisco mixed with a smidgen of Coney Island.

However, our down time along the coast didn't last long as we soon headed back into the town to our accomodations to prepare for preparing for the show. See there is a rest in preparing to go to the venue, then there is the time is takes to prepare for the show. It kind of makes sense. Anyway I sat on the patio of our hotel with a pint and admired the ships bogged down in the mud of the firth, (the mouth of the river that goes out to sea), a few hours away from the tide coming in.

Had a big show that night. Small joint and we sold it out.The sound was impeccable. The room quaint and the crowd lively. We killed it.

Highlight: Ryan sang Stack-O-Lee half way through the show and received the overwhelming adoration of the fans.

Wed 8/11, Topsham, England. The Globe A sleepy little town on the River Exe. Like a town built for little people, you feel like you have to squeeze in between the walls of the streets to walk down (or through them). The same was true for the venue. Twas like we were packed into a gnome's cottage or whiskey still. A great time though as Julian Piper from Acoustic Magazine UK was our promoter. He always does a great job.

Highlight: Walking (tiptoeing) out into the crowd and waking up an old lady after I noticed she had fallen asleep. It was somewhat embarassing for her but everyone had a good laugh. It just goes to show that if you come out to a show and you fall asleep be ready to have someone put you on the spot. You can't let someone sleep through your show. Seriously?

Thurs. 8/12, Pulborough, England. Blue Coconut Club We played this venue on the last date of our last tour over here in January. It was one of the most memorable shows I've had over here. This time was more of the same but this go around it was with a sold out crowd. The energy in the room is something I can't place. Maybe it's the fireplace. Maybe it's the huge room with the big round tables and it inspires me to be a lounge singer back in the day at a jazz club. I don't know what it is but always connect with the crowd there and they help us with a beautiful night.