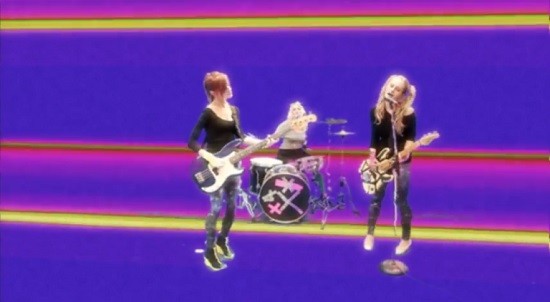 Screenshot from the video.

Mounting evidence suggests the boys in Tok are hilarious. Between interviews with dogs and daily features with tongs, the brothers Basler consistently bring the funny with out-of-the-box ideas and a strong sense of humor.

The latest? Welcome to the Tok cable access show, 3:00 am with Clive Dorvain.

Daniel Hill: Tell me about the project.

Matt Basler: The overall idea is that we are making an episode of 3:00 am with Clive Dorvain -- a fictional public access musical variety show. Each of the different acts will "perform" one of the songs from our EP Gold Dollar Hen House Vol 2.

Who has been involved in the filming?

We've been shooting and editing the videos ourselves with help from Matt Sawicki from Suburban Pro Studios. This particular video features two Tok wives, Nikki Basler and Deanna Markowski, friend Clair Bettale and DJ Who.

Where did the idea come from?

We started to get the idea when we were watching a lot of clips from World Wide Magazine.

Gimme some teasers about upcoming videos.

Tok will be in at least one of them, and we've talked to other local musicians about being a part of it.

Can we expect a Wizard of Oz-style live performance of any of the tunes? You know, like that Blues Traveler video?

I really hadn't considered doing anything with it live! Man... we could do a whole live "3:00 am with Clive Dorvain." Maybe we could even buy public access air time at 3:00 am!

Watch the video yourself below: