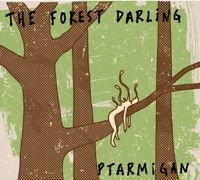 Columbia dream pop outfit Ptarmigan has been relatively quiet over the past couple years; front man Peter Marting spent four months of that working in the Peruvian rainforest. And the album the band just released, Forest Darling, became a massive undertaking involving field recordings from at least two continents, intricate tone effects and a vocal recording method Marting appropriated from his insect communication studies, where sound waves are vibrated through a tree branch and those vibrations are committed to tape.

We aren't great at explaining this; we are not earning insect communication degrees. Marting does a better job below. Plus, listen to a pair of tracks from the new album, including the one where the "treeverb" effect is used.

Did you find the field recordings from somewhere or take them yourself? In either case, what are they of/why did you decide to incorporate them?

Every sound on the album was created or recorded by us (and Wil Reeves of course). As far as the field recordings go, I recorded all of them using my Zoom H2 hand recorder. Many of the soundscapes come from the four months I spent in the Peruvian rainforest (August - December 2009). Examples include but are not limited to thunder on "Of the Hills and the Hunt", birds and frogs in "We the Forest", a midnight insect chorus at the beginning of "The Quadrille" followed by a lek of cackling birds call Cock of the Rock. I wanted to incorporate them into the album to help people get lost with us. I wrote many songs from the album actually in the rainforest, so I wanted to give people a sense of their genesis by including the sounds that inspired the music. A lot of the album is about wanting to be lost and finding comfort in bizarre unfamiliarities.

There are a lot of other field recordings I recorded from other excursions. Examples include a gofer tortoise inhaling on "Where" right before both vocals start saying words, and trucks passing on the highway during the "lay me down" part. A plane flying over toward the end of "My Mind Bleeds" and the sounds of waves crashing on the Gulf of Mexico carrying over into "Migratory".

Another sound that isn't a field recording but I would like to highlight is the goofy sounding solo in "Sentient". I study insect communication (which I will describe a bit more below) and use a program to synthesis insect signals to play to insects to get them to respond. Learning this new coding language inspired me to write a program that creates a random melody. Once you input the song key and speed of your liking, the program (we call him T.I.M.) spits out a melody of randomly selected notes, durations, and levels vibrato. Once I finished the program, I brought it into the studio and hit GO when the song "Sentient" was playing. We all fell to the ground laughing with how perfect it fit.

Walk me through the treeverb thing. Did you actually go, like, retrieve a branch and bring it into the studio, etc. etc.?

To really help you understand what is going on here, I'll give you a little background first. As I said, I study insect communication (due to finish my masters this July). The group I work with (called treehoppers) communicate using vibrations alone, no acoustic sound is produced. The way they achieve this is by vibrating their abdomen - those vibrations are transmitted through the insect's legs and onto the branch it is standing on. Other insects on that branch can feel it vibrating as long as the signaling insect is vibrating. They can then respond back and forth to one another. We can record these vibrations using a special tool called an accelerometer attached to the branch. In our lab, to talk to the insects we use a playback device called an "actuator" that attaches to the branch and vibrates like a treehopper to trick the insects into responding. Usually, we play the synthesized insect sounds through the actuator while we record it all using the accelerometer. For the album, we took the vocal track from "We, the Forest", played it through the actuator, and recorded it with the accelerometer. Thus, the vocal track was sent as a vibrational signal from the actuator through the living plant and picked up by the accelerometer about 20 cm away. Treeverb.

As a side note, the clicky sounds at the beginning of "Where" before the drums come in are actually planthopper vibrations likely never recorded before.

We, The Forest by Ptarmigan

Why did this album take two years to make? Was it just a deliberate songwriting process or were there some setbacks to overcome?

It took two years for a few reasons. First, my trip to Peru delayed things a bit. We started recording summer '09, then I left for the rainforest. Although I wouldn't consider it a setback because much of the album's inspiration stemmed from there. Once I got back, I started my masters degree here at MU. This probably contributed substantially to the amount of time it took us to finish the album, just due to the nature of grad school. Ted was also very busy working at a television station. Much of the next year was spent writing and tying together all the ideas we had in order to create something coherent. We began really hitting the studio hard in the fall 2010 and super hard early this spring. Getting all the tones and vocal parts the way we wanted probably took the longest toward the end.